“Everything is nearly copacetic. I went to a shirttail kin’s funeral yesterday. His wife had him cremated and put his ashes in an hourglass. That way, she’ll finally get some work out of him. I’m just grateful to be able to take nourishment. When I was a boy, we were so poor that we never had any food. All Ma could do was to read recipes to us. Grandpa was so hard of hearing that he nearly starved to death. My mother had to take in washing — cars. Still Bill, he’s a trash can with flesh, and I came out of Chewy’s Café, ‘If you think you’re tough, try our steaks,’ to find that Still Bill had locked the keys in his car. His car is a form-fitting Neon. He insisted he could open the car if he had a wire clothes hanger. Still Bill, he can’t blink without sweating, had to walk three blocks to a store to get a hanger. It didn’t take him long to get the door opened. As we got into the car, Still Bill, he’d have to speed up to slow down, put the hanger under the seat. He said, ‘Now if this ever happens again, I’ll have a coat hanger handy.’” 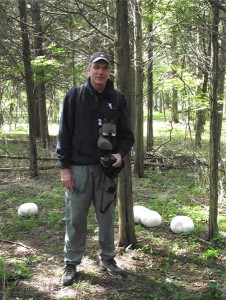 Al Batt being stalked by puffballs.

One year, a flicker hammered on an old and useless TV antenna on the roof of our house. The bird did this early each morning and was an effective alarm clock. The woodpecker hammered (or drummed) to announce his territory, as a cardinal does when it sings his song. Our antenna-pounding male displayed his vitality, vigilance and virility by making an impressive racket that exceeded that which he could have made by hammering on a tree. Bruce Armstrong, of rural Hartland, had a woodpecker this past summer that hammered away at a pipe extending from a vacant silo. This produced sounds loud enough to make any garage band proud.

“What do red-tailed hawks eat?” They prey mostly upon small mammals, including: mice, gophers, voles, shrews, moles, squirrels, chipmunks, rats, rabbits, opossums, muskrats, cats, skunks and bats. They also feed upon snakes, frogs, lizards, salamanders, toads, birds, crayfish, insects and fish. They eat roadkill. I saw a study that claimed that a red-tailed hawk is successful in about one out of 10 hunting trips.

“Am I seeing both bald eagles and golden eagles along the lake by my house?” Bald eagles belong to a group of sea eagles that live in or near aquatic environments and are piscivorous (fish eaters). Golden eagles belong to a group of true or booted (feathered legs) eagles and are upland eagles, meaning they are not near water. They primarily hunt upland mammals instead of fish. The bald eagle got its name from the old English word “balde” which means white-headed. Golden eagles are named for the golden color on their heads and necks. One good identification tip is that if there is visible white in the body feathers on the back or underparts (does not included wings), the bird is almost certainly a bald eagle. The ecology of the two eagles means that an eagle in the immediate vicinity of a river or lake is most likely a bald eagle, hunting fish.

“There are flies in the upstairs window of my house. What are they and where did they come from?” They are cluster flies, sometimes called attic flies. They spend their larval stage in earthworms and when they emerge as adults, they head for the dominant silhouette in the landscape, which is often a house.

“How can I make our lakes cleaner?” The Shell Rock River Watershed District says there are simple ways to cleaner lakes. Don’t litter and do recycle. Use no-phosphorous fertilizer. Dump nothing down storm sewers. Keep grass clippings out of streets. Leave a strip of trees, plants and flowers along shores.

“I saw a nearly white robin. How common is this?” True albinos occur in about one in 10,000 mammal births. Researchers found that albinism occurs in 17 of 30,000 birds or one in 1,764 birds. Leucism in birds is much more common. It is a condition where the pigmentation cells in an animal fail to develop properly. This can result in atypical white patches appearing on the animal, or, rarely, completely white creatures. An easy way to tell the difference between the two is that in albinism, the eyes are usually pink or red.

Woody the Woodpecker is based upon an acorn woodpecker.

Dandelion roots were cleaned, roasted, ground and used by the Confederate Army during the Civil War as a substitute for coffee or chicory.

In central Michigan there were 1,770 singing male Kirtland’s warblers counted this year, 35 in Michigan’s Upper Peninsula, 21 singing in Wisconsin and two in Ontario. The 1,828 singing males is a record high. In 1971, the species was nearing extinction, with only 201 singing males tallied. The first nests outside of Michigan were found in 2007.

“If people never did silly things, nothing intelligent would ever get done.” — Ludwig Wittgenstein

“For in the true nature of things, if we rightly consider, every green tree is far more glorious than if it were made of gold and silver.” — Martin Luther