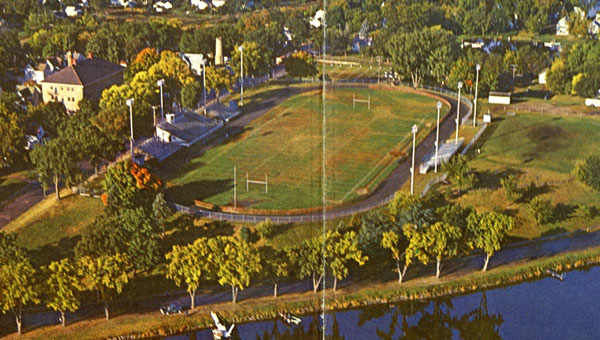 Here’s an aerial view of Albert Lea’s Abbott Athletic Field that was taken about 1966. The street in foreground next to Fountain Lake is Lakeview Boulevard. This particular field was used for football and track events by Albert Lea High School for 16 years.

For four full decades football games in Albert Lea were played on two fields named for a Presbyterian pastor and college president — The Rev. Russell B. Abbott. And how this came about is based on the city’s sports and educational histories. 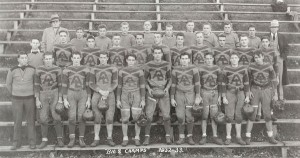 This is one of only two known photos in the archives of the Freeborn County Historical Museum Library that shows the slope-side wooden bleachers for the lower field used by Albert Lea High School football teams for home games from 1926 to 1949. Spectators also had the choice of watching the games by standing on the crest of the slope. -- Photo courtesy Freeborn County Historical Museum

The locations for two of three places since 1926 where the Albert Lea High School Tigers and Bengals (a name once used for the B teams) once practiced and played their home games was in a part of the city which has always had a strong connection with education.

From 1885 to 1916 this area along what was once North Pearl Street, and renamed Abbott Street about 1909, was the location of the Albert Lea College for Women. Abbott was the college president, plus the first installed pastor of the First Presbyterian Church in 1869.

After the college closed, one of the buildings named Cargill Science Hall was acquired by the school district. The name was changed to Abbott Elementary School about 1922. (This building, now over a century old, is now the Abbott Apartments.)

The former college campus area across the street from the science hall was also acquired by the school district and gradually converted into a large playground and a football field. 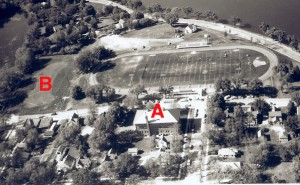 Here’s another aerial view that shows both the lower and upper Abbott Fields used by Albert Lea High School for a total of four full decades. The letter A designates the original Cargill Science Hall of the Albert Lea College for Women that late became the Abbott Elementary School and is now the Abbott Apartments. The letter B indicates the location of the lower field that was used for local football games from 1926 to 1949. -- Photo courtesy Freeborn County Historical Museum

According to the late Bidney Bergie, the west end of the former campus near Dane Bay was converted into a football field in 1926. This particular place facing Winter Avenue eventually became known as the lower field. On the east side a slope provided natural stadium-like seating for the spectators. In fact, wooden bleachers were built right against the slope. In this way the bleachers could never collapse. The lower field served as a playground after the end of football season. In fact, this slope can still serve as a place for children to use their sleds for sliding during the winter.

In 1950 the local school board approved the expenditure of $70,000 for the creation of a new Abbott Athletic Field on the upper portion of the former college campus. This site included the former location of the main college building and was much closer to the intersection of Abbott Street, Lakeview Boulevard and Vine Avenue. Bleacher seating was provided for about 2,000 people on both sides of the field and track. Eight 70-foot-high light poles supplied illumination for night games. Thus, the football field moved up from what could be called the lower field to the upper field.

This new football field was dedicated on the evening of Sept. 29, 1950. Superintendent J. John Halverson and Charles Upin, president of the Albert Lea Board of Education, were the main speakers at half-time. 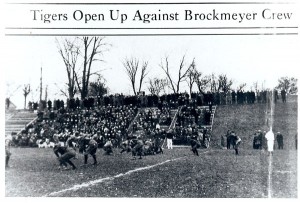 This is one of only two known photos in the archives of the Freeborn County Historical Museum Library that shows the slope-side wooden bleachers for the lower field used by ALHS football teams for home games from 1926 to 1949.

The football game that first evening at the new field was between the Tigers and Mankato High School with the visitors winning with a final score of 14-6.

In 1956 there was a problem with the overhead lights. After an intensive investigation it was revealed that a hungry gopher had chewed on a underground electrical cable.

Inside both the front and back covers of the 1967 Tiger Yearbook are double-page aerial photos of Abbott Athletic Field and the immediate neighborhood. This was in reality a nostalgic view of the field and track which was being replaced that fall by the even newer Hammer Field.

As a result, the place where the Tigers played their home football games and where the track teams trained and competed became the site for Lakeview Elementary School.