“Everything is nearly copacetic. I bought myself a used leaf blower. I love using it to blow the squirrels out of the trees. I drank some coffee today at Chewy’s Café, where even the coffee is chewy. I can drink the stuff because my brother donated a kidney to me. Now he has one kidney and I have three. I can filter anything. Pa was late getting to the cafe because he stayed in the carwash for three hours. He thought it was raining too hard to drive. Pa likes a clean car to drive to church every Sunday. He won’t wear his hearing aids and he can’t hear a thing the preacher says but he wants everyone to know whose side he is on. Pa told me what he did yesterday. He waded across the edge of a lake, escaped from a vicious dog, marched up and down a hill, stood in a patch of poison ivy, crawled out of a muddy river, and jumped away from an aggressive skunk.”

“I had no idea your father was such an outdoorsman,” I say.

“She shaved her legs.”

I looked up and I looked down.

I have a regard for creatures beneath my feet and overhead. I strive to do no harm. The day was in high-definition. The sunlight formed into a golden pool on the trail ahead. My walking scared up a rooster pheasant. I’ve seen so few of them lately that I apologized to the pheasant. I watched a couple of October monarch butterflies flutter overhead. An opossum walked near. It was all snout and teeth. Our eyes met. I knew what it was. I’m not sure it recognized me. It ambled off, searching for food. 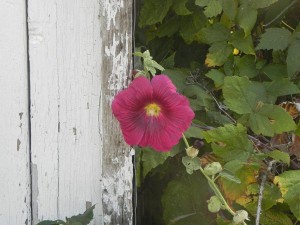 A photo of a hollyhock of Autumn by Al Batt.

Darwyn Olson, of Hartland, asked what the tiny black insects are that are biting him this fall. A good name for them would be “flying teeth.” They are minute pirate bugs. Their painful bites are out of proportion to their size. Minute pirate bugs are about 1/8-inch long, flattened and black with whitish markings on the back. They feed on insect eggs and small insects, and are found throughout the summer in fields, woodlands, and gardens. In September and October, they begin biting humans. They don’t feed on blood or inject venom or saliva. Studies show that they are attracted to the color blue. Insect repellents are generally not effective. Some people call them “no-see-ums,” a nickname shared with biting midges that are also called punkies and sand flies.

Steve Overgaard, of Albert Lea, asked when snapping turtle eggs hatch. Depending on the temperature, rainfall and moisture content of the nest, the eggs hatch in 55 to 125 days. Some nests overwinter with hatching occurring the next spring. The female typically lays 20 to 40 creamy white, ping-pong ball-sized eggs. She covers the eggs and returns to the water. Raccoons, skunks and crows prey upon the nests.

Paul Lynne, of Hartland, mentioned a bird known as the “slough pumper.” This is the nickname of the American bittern, a 2-foot tall bird that waits in reeds where it hunts for insects, frogs, crayfish and small fish. Its body blends in with the surrounding vegetation and when it points it bill skyward, it looks like a reed. It even sways with the breeze. Thoreau called it “the genius of the bog.” More often heard than seen, the bittern belches out a guttural song—“oong-ka-choonk.” This call earned it the names “slough pump,” “belcher squelcher,” “thunder-pumper,” “stake-driver,” “mire drum” and “bog bull.” Pioneers compared the call to the sucking of a pump or the sound of water going down a drain. Other interpretations of its call are “plooonk-a-looonk,” “plum-pudd’n” and “pump-er-lunk.”

Bob Lovejoy, of Eyota, wrote “I am on the board of the Oak Grove Cemetery. In the last couple of weeks, we have had something tearing up the grass. We had a burial and the gravedigger thought this was skunks or coons digging for grubs in the ground. I saw 6 to 8 crows in an area where this grass destruction was happening. Could this be crows doing the digging?” I see similar damage to cemeteries each year. It’s the work of skunks and/or raccoons. To my eye, the skunks do a neater job. Crows don’t miss a thing and they enjoy grubs. They keep their eyes open for spots where the mammals have done some excavating. They pick about in the dirt, hoping to find a tasty morsel. They do the same thing as gulls do when they follow farm equipment working the fields and freeing grubs and insects. The farmer truly does feed the world and that includes gulls.

There are many soup and pie suppers. What makes Cross of Glory Lutheran Church’s different? It’s a soups and pies supper. Silverware is available for those who feel the need to use such gear. Men are encouraged to wear soup blotters (neckties). Please bring your appetite to Cross of Glory in handsome Hartland from 4:30 to 7 p.m. on Nov. 2 and fling a fang into fabulous food. Servers are standing by.

Help Farmers State Bank celebrate its 100th anniversary. The bank is looking for old photos of Hartland. Please stop by the bank or contact me at 507-845-2836 or snoeowl@aol.com if you have one.