A flashing camera and speeding tickets

“Everything is nearly copacetic. I have nothing to do and I’m almost finished. You know, I enjoy getting mail and hope that the post office lives long and prospers, but I got some bad news in the mailbox yesterday. Nothing had hurt me so much since I got that autograph from Zorro.”

“It all started as I was driving to a soup and pie supper when I passed one of those traffic cameras. I saw it flash. It took a photo of my car’s license plate. That’s not good. That means I had been caught speeding when I wasn’t speeding. I turned around and drove past the camera again, driving well below the speed I had traveled the first time. The camera flashed again, even though I was going slower. So I turned around once more and drove by the camera at a snail’s pace. That stupid camera flashed again. It thought I was speeding. I was worried sick that I’d be getting three speeding tickets in the mail.”

“And that was the bad news in your mailbox?” I ask. 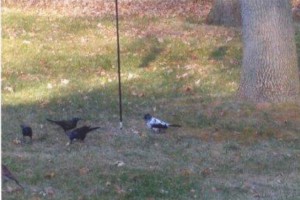 “No, I didn’t get any speeding tickets.”

“I got three tickets in the mail for not wearing a seatbelt.”

The muted light softened the edges. Fall leaves in flaming colors rattled in the wind. As an earthbound individual, I cannot help but feel enfeebled by birds fluent on the wing. A crow, playing in the air, was gone with the wind. Nature is open 24 hours a day. The greatest show on Earth is just outside your window. And there are no commercials.

Doug Christopherson of Albert Lea sent me photos of a bird that looked like a magpie. The bird was a common grackle that demonstrated leucism. There has been a difference of opinion in the scientific community about what to call birds with atypical white feathers. Entirely white birds with pink eyes are albinistic and pale birds with normally colored but pale plumage are leucistic. Birds with white patches intermingled with normal plumage have been described various ways. Albinism is a genetic mutation that prevents the production of melanin in the body. Melanin is a substance that gives color to skin, feathers and hair. Leucism is a genetic mutation that prevents melanin from being deposited normally on feathers. Birds with white patches have been described as having partial or imperfect albinism. Science has clarified the definitions. Birds with white patches have melanin in the body, so they cannot be albinistic. The white patches are caused by a defect preventing normal deposition of the melanin. Leucism is a deposition problem. Birds with white patches like the grackle Doug spotted are leucistic.

A caller asked what ants do during the winter? Smart ones crawl to Arizona. Some ants can adjust the structure of their nests to help regulate the internal temperature. Anthills act as solar-collectors, increasing the temperature inside. When it becomes too cold, the ants retreat deeper underground, below the frost line. Carpenter ants live in nests in wood. Wood is a good insulator but freezes in winter. The ants enter a state of slowed metabolism called “diapause.” Generally, the queen stops laying eggs. The workers begin to amass more than before. Cold weather doesn’t stop some ants from being active in buildings. A common indoor winter ant is the pavement ant. The reddish-brown pavement ant is 1/8-inch long. Pavement ants typically nest in the soil under stones, bricks, sidewalks or driveways. When the nest is kept warm from a building’s heat, the ants stay active, move through the cracks in concrete, and actively forage for food and water. Pavement ants prefer to feed on greasy food such as meat, dry pet food and peanut butter. Not all ants seen during winter are pavement ants. You may also see carpenter ants, Pharaoh ants, yellow ants and thief ants.

“Do chiggers burrow into my skin?” Chiggers are most commonly found in forests, grassy fields, gardens, parks and in wet areas around lakes or rivers. Chiggers are barely visible to the naked eye (they are less than 1/150th of an inch long). They are red in color and migrate onto human skin via areas of contact with vegetation, such as pant cuffs or shirtsleeves. A common myth about chiggers is that they burrow into and remain inside the skin. This is not true. Chiggers insert their feeding structures into the skin and inject enzymes that cause destruction of host tissue. Hardening of the surrounding skin results in the formation of a feeding tube. They feed upon the destroyed tissue and then drop off the host body. Barriers to migration on the skin such as the compression of belts may be one reason that chigger bites commonly occur at the waist or below.

“What is a dabbling duck?” It’s a type of shallow water duck that feeds primarily along the surface of the water or by tipping headfirst into the water to graze on aquatic plants and vegetation. These ducks are infrequent divers and are typically found in small ponds, rivers, and other shallow waterways. Dabbling ducks also forage on land for seeds and insects. Mallards are the most common dabbling duck.

Congratulations to Harlan Thompson of Albert Lea for being named Sportsman of the Year by the Fountain Lake Sportsmen’s Club.

The Albert Lea Audubon Society will be holding a birdseed sale on Saturday, Nov. 19 at the Albert Lea Seed House. Feed the birds and help Audubon at the same time.

Myrmecology is the study of ants.

The red-breasted nuthatch puts resin gathered from conifers around the entrance to its nest cavity. The male puts the resin around the outside of the hole and the female around the inside. It is believed that this may work to keep predators out.

Make a magnifying glass out of binoculars by turning them upside down and holding one of the lenses that you usually look through very close to the object that you’d like magnified.

“If I had to choose, I would rather have birds than airplanes.” — Charles A. Lindbergh

“If it’s sanity you’re after, there’s no recipe like laughter.” — Henry Rutherford Elliot