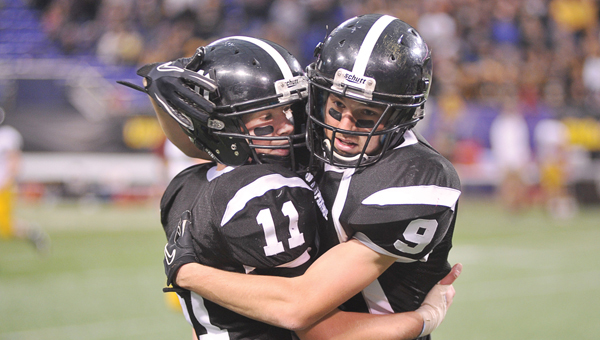 MINNEAPOLIS — It wasn’t how he wanted to do it, but Blooming Prairie’s senior quarterback now has more touchdown passes than any player in Minnesota high school football history as he threw his 102nd score in a 50-27 loss to Dawson-Boyd at the Class A state football semifinals in the Metrodome on Saturday.

Luc Zellmer finishes his high school career with one more TD pass than the former record holder — Minneota’s Chris Meidt, who threw his 101st TD in 1987.

“The record wasn’t really on my mind,” Zellmer said. “Winning was first and foremost on my mind. Maybe someday when I have gray hair and I’m old (I’ll appreciate it).”

The record-tying score came when Zellmer hit Gabe Kartes over the middle for 25 yards and Zellmer, who missed five starts this season with a broken thumb, broke the record with 2:20 left in the game when he hit Jonny Kraling on a 1-yard shovel pass.

Michael Thomas caught an early TD pass from Zellmer and he said the team wanted to see their signal caller hit the all-time mark, although they would’ve rather won the game.

Kartes has been catching touchdowns from Zellmer since the two started together as sophomores. He wasn’t thinking about the record when he caught Zellmer’s 101st score, but he’s glad with the time the two have had playing for Blooming Prairie.

“I wouldn’t trade it for anything, except for a state title,” Kartes said. “Luc is probably one of my best friends and life goes on. We’ll both probably end up playing in college and do bigger and better things. Neither of us really worried about the record, we just wanted to win. If it happened, it happened. We knew it was gonna come.”