Enchanted by a horizon of birds

“Everything is nearly copacetic. I know that today is the first day of the rest of my life, but I should have slept in until the second. The only thing that works consistently in my family is gravity. I’ve been painting pumpkins black for Thanksgiving. That’s because I love bowling. I moved Still Bill’s sofa.”

“Then how did you know he wanted it moved?” I ask.

“Because Still Bill was under it. I went to court to act as a character witness for Still Bill. Bump Whistlebritches down at the bakery sued Still Bill for theft.”

“Still Bill is too lazy to steal anything,” I say. 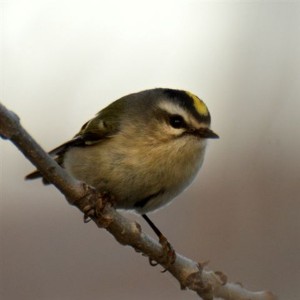 Photo of a golden-crowned kinglet by Darcy Sime, of Alden.

“Bump claims that Still Bill comes into the bakery each morning, inhales deeply for 10 minutes and then leaves. Bump claims that Still Bill smells the baked goods without paying. Judge Wearybottom was a cool guy. He reached into his pocket, pulled out a handful of coins and dropped them on his bench. They made quite a clatter. Bump asked, ‘What are you doing that for?’ The judge replied, ‘I am paying you on behalf of Still Bill. The sound of money is fair payment for the smell of food.’”

The sun had barely licked the sky when a giant flock held together by many small parts spilled onto the new day. A sky-filling flock rose to the empyrean. A ribbon of blackbirds twisted and glided overhead as they slid through my day. I found myself kept at the horizon of birds. It was an enchanting place to be.

An eagle on ice

Mark Lissick found a juvenile bald eagle trapped in the ice on the Chilkat River at Mile 21 of the Haines Highway and reported it to Alaska State Parks who in turn notified the American Bald Eagle Foundation in Haines. The eagle was rescued by a volunteer named Manda Maggs who went onto the ice. Manda cut the eagle’s feathers that were frozen securely to the ice. That made it possible to free the eagle. Manda didn’t take any photos of her rescue adventure. She had left her camera in a safe place. Manda had decided that if she fell in, she didn’t want to get the camera wet. The eagle was flown compliments of Wings of Alaska and Alaska Airlines to the Alaska Raptor Center in Sitka. There it will grow new feathers so that it might be released into the wild one day.

Several news media outlets reported in 2004 that a wild black bear was found passed out drunk after drinking 36 cans of beer in Baker Lake, Wash. The bear opened a camper’s cooler and used its claws and teeth to open the beer cans. The bear had opened all the cans of Rainier Beer and left all but one Busch beer unconsumed. I am not sure if Rainier Beer has ever incorporated such an event into its advertising.

Shoppers in Ketchikan, Alaska, were treated to a bear market. A small black bear cub walked in the front door of Tatsuda’s IGA. It made its way to the produce cooler, where it made a mess. The meat department manager responded to the PA announcement with a net because he had misheard the announcement to say there was a bird in the store. Authorities suspect the visitor was an orphaned bear that was frightened and looking for a place to hide. A customer captured the bear and released it out the back door of the store into woods. The store donated several thousand dollars of ruined produce to a livestock owner.

Alaska Fish and Game biologists removed the treble hook of a Pixie lure from the nostril of a 160-pound brown bear yearling. The bear and the sow that was protecting it were tranquilized near the Chilkoot River not far from Haines. The cub apparently had been snagged after rooting through a tackle box. Fishing lures stuck on brown bears aren’t uncommon along the Chilkoot, where about 18 bears share the river with anglers and bear-watchers each fall. The sow with the cub had a Pixie impaled on its hindquarters earlier. Lures typically fall from bear hides, but this one would not have come out on its own. Other than the hook, the cub was in great condition. Bear-human encounters have improved since the state stationed a bear monitor along the river. A planned bear-viewing platform at Chilkoot will help by giving bears a predictable human activity, allowing bears to interact with people in a more controlled fashion. A robust pink salmon return to Chilkoot draws the bears.

“Is there any spray I can use to discourage squirrels?” I have not used any spray as a squirrel deterrent, but I have heard from many readers regarding such things. I’ve been told that squirrels don’t like the smell of dog repellent spray. They also reportedly dislike the smell of vinegar. I know that many people have used Liquid Fence to deter squirrels from digging up bulbs or potted plants and from making a dog’s breakfast of the landscaping.

Liquid Fence is an all-natural repellent with ingredients that include garlic. Again, I must qualify my answer in that I have never used these methods to keep squirrels at bay. I have tried mothballs and found them of no help.

Purple martins migrating from Pennsylvania took 43 days to reach Brazil in the fall. They took 13 days to move from Brazil to Pennsylvania in the spring.

Wild turkeys can be found in all states except Alaska.

A chionophile is an animal that thrives in winter conditions, especially in snow.

The golden-crowned kinglet, about four-inches long from the tip of its bill to the tip of its tail, has a single, tiny feather covering each of its nostrils.

“The invariable mark of wisdom is to see the miraculous in the common.” — Ralph Waldo Emerson

“Tact is the ability to describe others as they see themselves.” — Abraham Lincoln