His special days with honor flights

Editor’s note: This is the last in a three-part series.

Lester “Les” Shaunce has visited the nation’s World War II Memorial in Washington, D.C., on three occasions as a guardian for area veterans. Also, during the past three years he’s been a strong promoter and advocate for the program that provides chartered one-day airliner trips at no expense from Rochester to the nation’s capital and back for veterans of this war to visit their memorial. 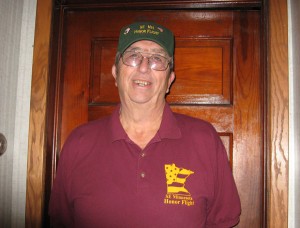 The shirt Lester “Les” Shaunce has worn on three occasions as a guardian for the South East Minnesota Honor Flight trips to Washington, D.C., has the maroon and gold colors of the University of Minnesota. However, the predominant colors are reversed for the shirts worn by the World War II veterans on the Honor Flights. -- Ed Shannon/Albert Lea Tribune

However, for Shaunce and other guardians, the round-trip is at their expense. And for him there’s the added expense for using his van to take the World War II veterans from Albert Lea to the Rochester Airport and bring them back to the city on Saturdays that starts about 4 a.m. and ends at midnight.

“I’ve paid my own way, but it was well worth the money,” he explained about the three guardian trips to Washington.

Shaunce added, “I’ve also made arrangements to get the guys to Rochester and back, so it’s no big deal to use my van.”

He also worked with Donny Fredrickson to provide those rides.

In fact, he has made all the Honor Flight trips from Albert Lea to Rochester and back, except for one occasion during May 2010. On that day he was at a American Legion District One meeting.

It was at an earlier district meeting where he became aware of the Southeast Minnesota Honor Flight organization based in Rochester. This group of volunteers was promoting day trips at no cost to Washington for World War II veterans so they could see their memorial. Shaunce obtained the application forms and gave some to Freeborn County Veterans Service Officer Jon Rhiger and left others at the legion club. 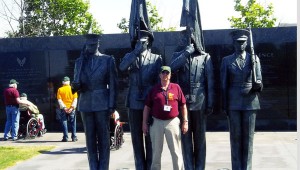 During one of his three trips to Washington, D.C., as a guardian with the Southeast Minnesota Honor Flight, Les Shaunce had the opportunity to visit the U.S. Air Force Memorial in Arlington, Va. On the left in this photo a guardian is shown pushing a wheelchair so a World war II veteran can get closer to the memorial wall. -- Photo courtesy Les Shaunce

As guardian he specifically worked with two veterans to provide guidance and possibly push a veteran in a wheelchair. Among the places the Honor Flight participants visit in Washington after the World War II Memorial include the Vietnam and Korean War Memorials and a bus tour of the scenic and patriotic highlights of the nation’s capital city.

Shaunce grew up in Geneva and graduated from Ellendale-Geneva High School in 1963. Two years later he enlisted in the U.S. Air Force and served a good portion of his four years of active duty in Japan.

He’s been a member of the American Legion for approximately 21 years. Shaunce has held several positions in the local legion and became commander of Leo Carey Post 56 in 1999-2000. At the present time he’s a member of the post’s honor guard and participates in funerals and patriotic programs. 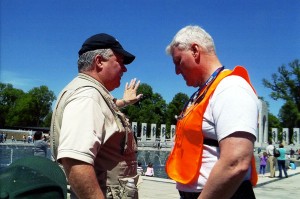 The man on the left is unidentified. However, the man on the right is Earl Morse, a retired U.S. Air Force captain from Springfield, Ohio, who created the Honor Flight concept in 2004. He, like former Senator Bob Dole, tries to be at the World War II Memorial whenever possible to greet the veterans of that war. A portion of that memorial is shown in the background.

Shaunce has also been an officer in the legion’s first district, based on southeast Minnesota, and held all posts except commander. He said his present work during evenings would hinder being the district commander.

He worked at Minnesota Corrugated Box for 15 years. After retirement in June 2007 he started his present employment in maintenance at the Mayo Clinic Health System.

The Shaunce family includes his wife, Diane; son, Steven, who lives in Jackson; a daughter, Stephanie Hueper, who lives near Mankato; two grandchildren and “one on the way.”

“I’m glad I got involved with the Honor Flight and the friends I’ve made are unbelievable,” he commented.