Editor’s note: This is the first in a three-part series.

Before the advent of electricity, people had several options for lights in their homes during the night hours. 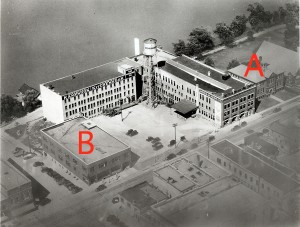 This large building complex on East Clark Street was the offices and manufacturing center for American Gas Machine Co. from 1910 to about 1947. Then the buildings were used by other firms until 1967 and replaced with the present Albert Lea City Center. Letter A was St. Theodore’s School and the site is now a parking lot and parish house. Letter B was then Lesota Tool Co. and is now ABG Financial Center. -- Photo courtesy Freeborn County Historical Museum

One was based on the flickering light from a fireplace burning wood or coal. Another was sitting around a table with a kerosene lantern or several lit candles in the middle to read, write or do homework. The third was to rely on lighting the American way.

That last suggestion was based on using a lamp manufactured in Albert Lea by the American Gas Machine Co. And as the name indicated, the lamps used untreated (regular) gasoline as their fuel source.

The American Gas Machine Co. was an important part of local life from 1896 to about 1947. This firm was started by Hans “Gas” Hansen, a Danish immigrant, and specialized in gas lanterns and lamps, kitchen appliances, space heaters, camping equipment and other devices using gasoline, fuel oil and kerosene to supply heat and light.

In an era when electricity was still unavailable for smaller communities, plus remote and rural parts of the nation, this firm had an extensive consumer base. In fact, the firm’s 1937 catalog said it was “the largest manufacturing organization of its kind in the world.”

This same catalog had the following information about some of it products: 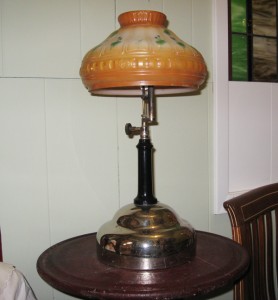 The Freeborn County Historical Museum has a large display of American Gas Machine Co. products once made in Albert Lea. One of those items is this Ready-Lite table lamp. The firm’s 1937 catalog said the three pints of gasoline in the base could provide light for 15 to 18 hours. -- Ed Shannon/Albert Lea Tribune

“American liquid fuel appliances are sold, not only all over the United States, but also throughout the world. There is hardly a country where KITCHENKOOKS, READY-LITE lanterns and the many other American liquid fuel appliances may not be found. These appliances have been used as for in the South Pole as man has penetrated, since food for the (1933-35 Admiral Richard) Byrd Expedition was prepared on KITCHENKOOKS, and READY-LITE lanterns helped dispel the darkness of the Antarctic nights.”

Next week: Information about another line of household products from this firm, plus proof of American Gas Machine’s nationwide scope.