Editor’s note: This is the second of a three-part series.

On Oct. 8, Dr. Ruben Schmidt and his wife, Ila, a retired nurse, made a one-day trip to Washington, D.C., as part of the Southeast Minnesota Honor Flight. 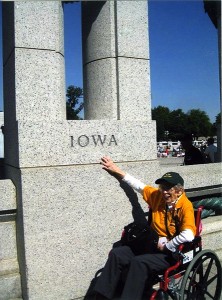 During her visit to the nation’s World War II Memorial in Washington, D.C., on Oct. 8, Ila Schmidt made a special visit to the Iowa pillar as salute to the state where she grew up.

For this couple, both World War II veterans, this trip had real significance for two reasons.

“I went to D.C. on my birthday,” the doctor declared. To emphasize this fact, he wore a badge with a blue border and ribbon during the trip.

The other major reason was based on visiting the World War II Memorial on the National Mall, not far from the White House, Washington Monument and the Lincoln Memorial.

The couple was in the same team or group and had a guardian or escort to help them to go from place to place as they mainly used wheelchairs to visit the various memorials and other sights in the nation’s capital city. She also did some walking on that Saturday.

At the World War II Memorial there are 56 granite pillars, one each for the states and territories. Nearly all the veterans in this Honor Flight went to the Minnesota pillar for obvious reasons. However, for the Schmidts their focus was on two other pillars. For the doctor it was the Wisconsin pillar. For his wife it was the Iowa pillar. Then the couple went to the Minnesota pillar. Here’s why this took place.

Ruben Schmidt was born in Shawano County, Wis., graduated from Shawano High School and attended the University of Wisconsin Medical School where he graduated in 1943. After two years as an intern in Duluth, he became a captain in the U.S. Army Medical Corps in 1945. Most of his overseas service up to November 1947 was in South Korea with the military government unit on the island and province of Cheju Do. 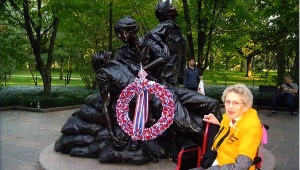 During her visit to the nation’s capital city on Oct. 8, Ila Schmidt visited the Vietnam War Memorial. Not far from the famous wall is a statue honoring military nurses. As a veteran and Army nurse during World War II, this statue had special significance for Schmidt.

In May 1948, the doctor moved to Alden where he became a family physician until retirement in 1985. During his years in Alden Schmidt was the city’s mayor from 1953 to 1967.

Ila Iverson Schmidt was born in Hartland Township, Iowa. She graduated from Northwood High School and attended St. Olaf College and Fairview Hospital School of Nursing. In 1942 she joined the U.S. Army Nurse Corps, attained the rank of first lieutenant and served overseas in Australia, New Guinea and the Philippines until late 1945. She was primarily a night supervisory nurse at Naeve Hospital for 35 years and retired in 1982.

The Schmidts lived in Alden, then the Village Cooperative for five years. In March they moved to an apartment at Thorne Crest Retirement Community.

About 3:30 a.m. on Oct. 8, the Schmidts were taken to the county garage on North Bridge Avenue by a great-niece and her husband, Meta and Chris Johnson of Hayward. Then the couple went by van to the Rochester airport. 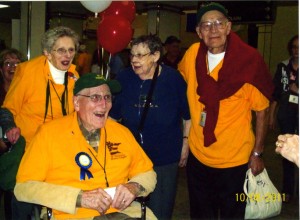 This photo was taken when the Honor Flight returned to the Rochester Airport on the evening of Oct. 8. From left are Ila Schmidt, Dr. Ruben Schmidt, Beverly Meyer of Alden who came to the airport to greet her husband, Leo, also a World War II veteran, who made the special trip to Washington, D.C.

During their visit to Washington, the Honor Flight group made stops at the World War II Memorial, Vietnam and Korean War Memorials, the Iwo Jima Monument, enjoyed a bus tour of the nation’s capital city, and for Ila a visit about lunchtime at the Women in Military Service for America. This particular place is near the entry to Arlington National Cemetery and for this retired nurse a place where her wartime service is a part of the archives.

During their visit to Washington, a nephew and great-nephew from North Carolina met the couple.

On their return to the Rochester Airport the Honor Flight participants were greeted by a large crowd. Among those people was a nephew, Keith Iverson and his wife Janet of Hayward, who brought the Schmidts back to Albert Lea.

“It was a fantastic day. I’m glad we could go,” Ila Schmidt declared about a long, long day that revived memories of the couple’s military service during World War II.

Next week: The Albert Lea resident who has gone on three Honor Flights as a guardian.