For two residents of the Good Samaritan Society, Oct. 8 revived memories of their military service during World War II.

On that Saturday the two U.S. Navy veterans joined a dozen other veterans from Freeborn County on a one-day trip to Washington, D.C., to visit the nation’s World War II Memorial. 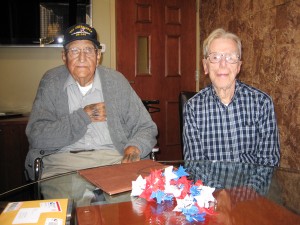 Good Samaritan Society residents Harold Holst, left, and Harold Sweet are World War II veterans. On Oct. 8 they were with a group of area veterans who went to Washington, D.C., on an Honor Flight. -- Ed Shannon/Albert Lea Tribune

During that special day Harold Holst and Howard Sweet visited the World War II Memorial, plus the Vietnam and Korean War Memorials, the Iwo Jima flag raising statue in Arlington, Va., and went on a bus tour of the nation’s capital city.

Holst served for 17 months on the USS Oberrender, a destroyer escort he called a “tin can.” He grew up in Lake City and started working at Hormel in Austin prior to World War II. During his service in the Pacific Theater he said he saved another sailor’s life. After the war he again worked at Hormel until retirement. Holst has lived at Good Samaritan and says it’s a “good place.”

Sweet served on a small ship in the Aleutian Islands of Alaska that transported supplies to isolated bases in the North Pacific and Bering Sea. He served in the U.S. Navy from October 1943 to January 1946 and was a rural mail carrier in the Alden area for 34 years. Sweet has lived at Bancroft Creek Estate for 13 years and said he was one of the first residents. He commented that this part of the Good Samaritan Society is “a very good place to live.”

Their special day in October was a time with a really full schedule. Holst and Sweet were taken to the county shop on North Bridge Avenue and left the city in a van about 4 a.m. 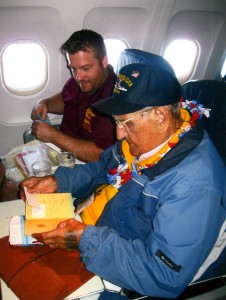 While riding in the Delta airliner during the Honor Flight to Washington, D.C., on Oct. 8, Harold Holst, right, had what was called “mail call.” At that time his guardian from the Twin Cities area gave him a stack of letters from students from Rochester area schools that had messages thanking him for his military service during World War II. -- Courtesty Harold Holst

What was actually the last trip from the Rochester airport for the Southeast Minnesota Honor Flight organization was on a Delta airliner. This plane had 185 passengers. Of this number, 118 were World War II veterans and the rest were guardians or escorts and several medical personnel. (There was one guardian for each two veterans.)

The arrival at a Washington airport was the start of a day with groups of people greeting the veterans. As Holst commented, “I never saw so many people and did so much handshaking.”

For the two veterans from the Good Samaritan Society, there were no real problems getting around from tour buses to the various memorials at all. Holst relies on a wheelchair and Sweet uses a walker. Yet, they had plenty of assistance from others to move around during this special day.

Sweet said there were two former senators at the World War II Memorial to greet the Honor Flight participants from various parts of the nation. One was Bob Dole, who was a senator from Kansas and a wounded veteran of World War II. He was a strong promoter of this memorial that was dedicated in 2004. Also there to greet veterans on Oct. 8 was his wife, Elizabeth Dole, a former senator from North Carolina. The Doles, incidentally, lived somewhat nearby and he tries to be at the memorial as often as possible to meet the Honor Flight participants.

One detail of this trip that the two former sailors stressed was the fact their trip and three meals that day were at absolutely no cost.

Their charter flight left the Washington airport about 7:30 p.m., Minnesota time. The trip back to Rochester took two hours. Arrival in Rochester was a real surprise with many friends and relatives, plus several honor guard units from area veterans’ organizations, on hand to greet the Honor Flight group. Sweet said there were even people from Alden in the crowd. 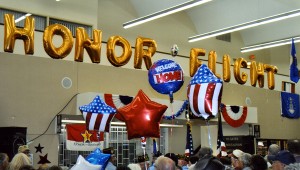 This is the scene in the terminal at the Rochester Airport that welcomed Harold Holst and Howard Sweet and other Honor Flight veterans when they returned from a trip to Washington, D.C., on the evening of Oct. 8. -- Courtesy Harold Holst

This really special day for Holst and Sweet ended about midnight with the arrival back in Albert Lea.

Next week: A local couple, both World War II veterans, were also on this Honor Flight trip.