“That’s a shame,” I say as a man who has never met a potato he didn’t love.

“I blame myself. I should have planted more. I hit a skunk with my car. If I drive fast enough, I can hardly smell it. Speaking of skunks, I remember working for Lou Pole the accountant. He worked me like a rented mule and found a loophole so that he didn’t have to pay me. Part of my job was to bring Lou a cup of coffee each morning. Lou was ticked off because the cup always arrived two-thirds full. I had to rush to get the coffee delivered, which caused me to spill some along the way. Lou threatened to cut the pay I wasn’t getting if I didn’t deliver a full cup. I began putting some of the cafe’s coffee in my mouth before carrying the cup to Lou’s office. I’d spit the coffee into the cup to replace what had spilled. Then I’d give it to Lou. It worked until I spit my gum into the cup.”

I was teaching a class on birds at an institute of higher learning and I asked how many in the class liked birds. Most of the students raised a hand. That was reassuring. Then I asked why they liked birds and called on one young man who had an arm up.

He answered, “I like birds because until now, they were never part of a test.”

I spent part of a day with Bob Henderson in Haines, Alaska. Bob is a 91-year old retired high school science teacher. Bob was born in West Virginia and came to Alaska with the Coast Guard. He raised five children in Haines. He owns 16 acres that was once a dairy farm. We talked about the previous owner of the property who milked cows in the 100-year old barn. There aren’t many dairy farms in Alaska today. Bob has catalogued the flowers of the area, from his favorite, the twinflower, to the calypso orchid that blooms under deciduous trees at the time when the dandelions flower. He has long and precise records as to what blooms when and where. Bob lives alone now, except for his dog and a few horses. His wife died and his children have moved away. His love of nature, particularly flowers, sustains him. 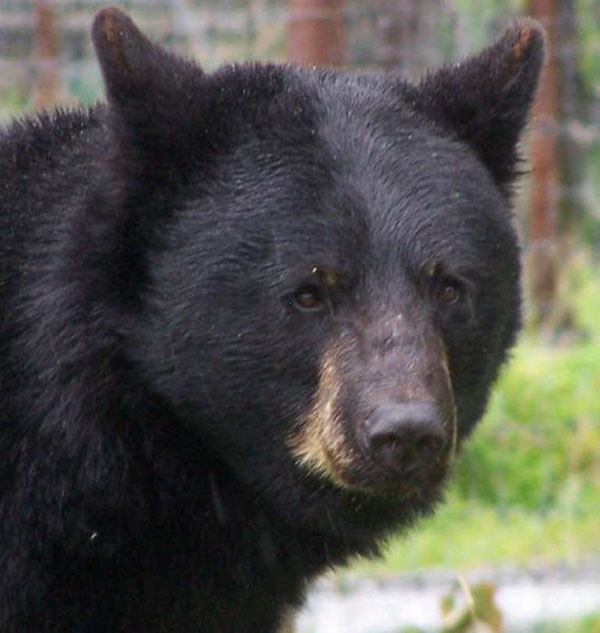 Photo of a black bear by Al Batt.

A friend named Dan Egolf runs Alaska Nature Tours in Haines. Dan and I were discussing the intelligence of crows and ravens. Dan mentioned that where the cruise ships dock, there is a spot where the crows and ravens have designated their restroom. A wise tourist, getting off a ship, does not want to stand in that drop zone.

“What is it called when a bird rubs its bill on a branch after it has eaten?” the process in which a bird removes food from its bill is called “feaking.” Rubbing the bill along a hard surface also helps keep the beak trimmed. Bird bills are made of keratin, as are feathers and our fingernails.

“What is a raptor?” Essentially, it is a bird that takes prey by the use of talons.

“What is the difference between a ‘bill’ and a ‘beak’?” Except for the spelling, nothing. The terms are interchangeable.

“What do bullheads eat?” A bullhead feeds mostly on aquatic insects and small fish, but a bullhead will eat practically anything it can find that will fit into its mouth.

My thanks to those who have commented on my columns in Bird Watcher’s Digest. I appreciate hearing from you and it is an honor to write for such a fine magazine. BWD does much good for birds and nature.

A chickadee can put on 8 percent of body weight in fat in one day. That would be the equivalent to a 200-pound man adding 16 pounds of fat in a single day.

Bats use sound to navigate and detect moving objects. They are better able than birds to avoid striking wind turbine blades. They can’t detect the invisible swath of low pressure left behind turning blades. That causes their internal airways to expand rapidly, causing internal bleeding. This phenomenon is known as barotraumas.

The black bear once occurred over most of North America from Alaska and Canada south into the central regions of northern Mexico.

There was a pronounced decline in American white pelican numbers in the mid-20th century, attributable to the excessive spraying of DDT as well as widespread draining and pollution of wetlands. Populations have recovered well after stricter environmental protection laws came into effect, and are stable or slightly increasing today.

According to fulminologists (those who study lightning) at The National Lightning Detection Network, an average of about 20 million cloud-to-ground lightning flashes occur every year in this country. Around the world, lightning strikes the ground about 100 times per second.

“Never bear more than one trouble at a time. Some people bear three kinds — all they have had, all they have now, and all they expect to have.” — Edward Everett Hale

“To a bear almost everything is food except granite.” — John Muir