Shaking off the dust 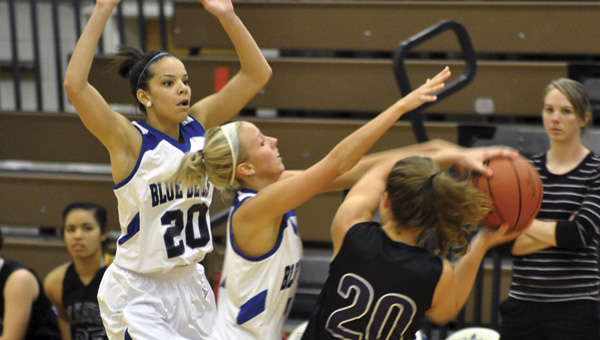 AUSTIN — The Blue Devils are turning back the clock a couple of years as they prepare for the upcoming women’s basketball season.

Riverland Community College has a lot of talent, but some of that talent hasn’t taken the court in two years or more.

One of the new players is center Rebekah Aase, who started on the Austin girls’ basketball team that went to state in 2008, but hasn’t played much since.

“We’re definitely working on shaking off the rust,” Aase said. “Once we all learn to play together and get our heads back in the game, we’ll be a lot better. A lot of us haven’t played in a while, but hopefully it comes sooner, rather than later.”

Another one of Riverland’s newcomers is Takiyah Stewart, who played for Minneapolis North as it won three straight state titles from 2003 to ’05.

Riverland’s other new contributors include Cassie Masberg, of Waterville-Elysian-Morristown, who sat out last year with an injury, Skylar Anderson, of Albert Lea, Brittany Murphy of St. Paul and Sophia Hebrink, of Austin.

Along with returnees Robin Arjes, of Austin, Kim Craig, of Southland, Selena Gindratt and Bridget Bergstrom, the Blue Devils have plenty of players to call on this season.

“We have a lot of depth, but if we have a group out there on a spurt, we’re going to leave them out there until they get tired,” Riverland head coach Suzy Hebrink said. “We can go 12 deep, but sometimes that’s not the best way to play. We’ll try to maximize and play efficiently and see what happens.”

Riverland looks to hound the ball on defense to trigger its offense, where the team must replace its all-time leading scorer Krista Viehauser, who graduated last year.

While Stewart has made some plays in practice, Hebrink said it will likely be a team effort to score this season.

“We’ve got a lot of girls who can score, but it is yet to be seen if we have a go-to scorer,” she said. “I think as long as we shoot the ball well and move the ball well, we’ll be fine. Defensively, I think we’ll continue to improve. There’s been a lot of competitiveness in practice and that’s good.”