“Everything is nearly copacetic. I spent four hours in the Mall of America. I couldn’t find my way out. I got another ticket for attempted speeding. I was doing my part for the economy. If everyone drove a little faster down the highway, the wind produced by the speeding vehicles would help spin the wind turbines. This would produce more electricity and that would allow us to spend more time working nights in order to pay our electric bills. I’m a giver, that’s what I am. I went as the economy this Halloween. Scared the socks off so many people, I won’t have to buy any for years. Doc Splint Eastwood Splint couldn’t diagnose a case of root beer, but he says that I have the highest cholesterol count in the county. I beat the old record set by Odds And Edds. We call him that because he has an odd end. You know what that means?”

“You are going to start dieting 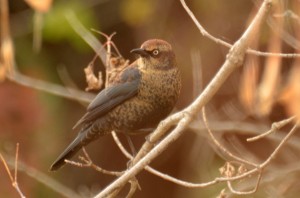 Photo of a rusty blackbird by Darcy Sime, of Alden.

and exercising?” I say.

“No, I’m going on to the regionals. Oh, did I tell you I got a job? I’m working for the city. I spend the day going from place to place, checking to see if all the public bathrooms are clean. They aren’t.”

A swirling flock of blackbirds landed in the tree of my yard. The tree dropped leaves to make room for birds filled with gossip. As I stepped outside, I heard the moaning of one tree cradled in the limbs of another. It was windsong. Winter brings a fair amount of deprivation. It takes autumn from us. Each morning, I want fall to last one more day.

I drove into the Freeborn Cemetery. It’s a beautiful graveyard. A place of remembrance, honor and spiritual refreshment. I exited the car to the background music provided by the roar of combines. I sat on a wooden bench surrounding an ancient oak. The antics of jays, robins, flickers and juncos entertained me. Leaves in countless colors danced in the wind. I sat with people I once knew and with strangers. I matched their silence.

Colleen Lyle, of Oakland, called me about a turkey vulture she and her husband, Luvern, had discovered in a farmfield during the harvest. I gathered the young bird (it had a black head instead of a red one) from them and drove it to The Raptor Center at the University of Minnesota. My car smelled a bit like a henhouse after the trip, but I was happy to help. I appreciate turkey vultures. Vultures and coyotes are big consumers of carrion on our roads. They are part of nature’s sanitation crew and are volunteers. They do jobs that few if any of us would want to do. Not many people enjoy working with roadkill. I hope the vulture recovers and is released on the Lyle farm. We need the bird. There are dead skunks, raccoons and opossums going uneaten.

“How many different kinds of birds come to a hummingbird feeder?” Other than hummingbirds, 56 species have been documented feeding on sugar water.

“What should I know about snapping turtles?” Heads from tails. The heads bite.

Nancy Skophammer, of Albert Lea, asks what wild turkeys eat. Wild turkeys are omnivores. Their main source of food is plant material — as much as 95 percent of the turkey’s diet may come from plants. The most common foods are grasses, green leaves and seeds. Acorns, fruits and berries are important during fall and winter. Agricultural crops play a crucial role in supporting turkey populations. I see turkeys feeding where cow manure has been spread onto a field. They eat grasshoppers, dragonflies, snails, beetles and salamanders. Insects are a smaller component of a turkey’s diet. Young wild turkeys (poults) consume large amounts of insects in order to get the required protein. Wild turkeys nearly always feed on the ground, rarely feeding while roosting in trees. They feed heaviest during the two to three hours after leaving the roost in the morning and again during the two to three hours before sunset.

New research by the U.S. Geological Survey’s National Wildlife Health Center and its partners confirms that the fungus, Geomyces destructions, is the cause of whitenose syndrome in bats. Although the syndrome is named after the telltale white fungus that grows on the faces of infected bats, scientists weren’t sure if the fungus was the cause or a symptom.

A study of 280 healthy people in Japan, where visiting nature parks for therapeutic effect has become a popular practice called “Shinrin-yoku,” or “forest bathing,” has been published. Some people were instructed to walk through a forest or wooded area for a few hours while others walked through a city area. On the second day, they traded places. Scientists found that being among trees produced lower concentrations of cortisol, lower pulse rates and lower blood pressures.

The highest-flying bird ever recorded is a kind of vulture called the Rüppell’s griffon. On Nov. 29, 1975, a griffon was sucked into a jet engine 37,900 feet above the Ivory Coast. Aside from the bird, no one was hurt. This was at an altitude of over a mile and a half higher than the summit of Mount Everest.

According to the Cornell Lab of Ornithology, “The rusty blackbird is one of North America’s most rapidly declining species. The population has plunged an estimated 85-99 percent over the past 40 years and scientists are completely puzzled as to what is the cause. They are relatively uncommon denizens of wooded swamps, breeding in the boreal forest and wintering in the eastern U.S. In winter, they travel in small flocks and are identified by their distinctive rusty feather edges and pallid yellow eyes.”

“To the attentive eye, each moment of the year has its own beauty, and in the same field, it beholds, every hour, a picture which was never seen before, and which shall never be seen again” — Ralph Waldo Emerson

“Half our life is spent trying to find something to do with the time we have rushed through life trying to save.” — Will Rogers

Al Batt of Hartland is a member of the Albert Lea Audubon Society. Email him at SnoEowl@ aol.com.