A new leap year a century ago

Exactly a century ago Albert Lea and the rest of the nation changed calendars and welcomed a new year that would have an extra day at the end of February. And what may have been missed at the start of 1912 was an unusual, once-a-century phenomenon regarding the following day. 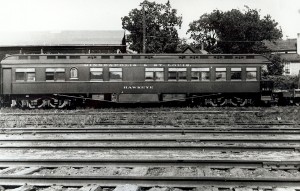 One of the transportation firms serving the Albert Lea area a century ago was the Minneapolis and St. Louis Railroad. Here’s a photo of one of their passenger coaches. And as the name on the side indicates, this coach was a part of trains that went through Albert Lea into Iowa. -- Photos courtesy Freeborn County Historical Museum

Now, once again, this same numeric phenomenon will occur tomorrow. It’s based on the obvious numeric listing for the day 1-2-12. This could be called twelve-twelve day or double twelve day. Just a year and a day ago, and also a century earlier, the numeric result was quad one or four ones day.

A check with local newspapers a century ago didn’t indicate how much snow was on the ground. However, a weather report in the Jan. 2. 1912, edition of the Tribune indicated the low temperature on New Year’s Day was 18 degrees below zero and the high went up to two degrees below zero. This report, incidentally, was made by the government’s area weather observer, former city police chief Edward Carey who lived at 311 E. William St.

There weren’t too many horseless carriages, or automobiles, in 1912. Transportation on the frozen and sometimes icy and/or snowy roads was by sleighs or sleds. Yet, the most reliable way to move around fairly well from town to town was the railroad system and the passenger trains that made Albert Lea a real crossroads community. 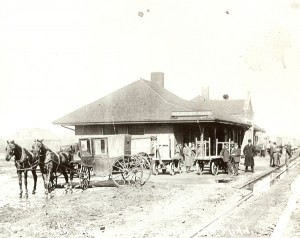 To emphasize this, the Tribune published a daily railway timetable schedule for the four railroad firms then serving this part of the state.

The Chicago, Milwaukee, St. Paul & Pacific Railroad provided two east-west passenger trains a day to and from Austin, Hayward, Alden and Wells. A branch line had one train to and from Freeborn and St. Clair each day except Sunday.

The Illinois Central Railroad had three daily trains going to and from Glenville, Lyle and Charles City, Iowa, and Waterloo, Iowa.

There were three daily passenger trains for the Chicago, Rock Island & Pacific line from Des Moines, Mason City and Northwood, Iowa, through Albert Lea to Clarks Grove, Ellendale, Owatonna and north to the Twin Cities.

The Rock Island also had a branch route then known as the Germania Line, which had one daily passenger train to and from Albert Lea, Conger, Walters, Bricelyn and several localities in Iowa.

A century ago Albert Lea had a daily newspaper, the Tribune, plus several weekly newspapers. On of those weeklies was the Freeborn County Standard, issued on Wednesdays. In the Dec. 27, 1911, issue, this publication commented editorially.

“Good bye Old Year, a fond farewell and thanks galore for many blessings you have bestowed on us. Hail and welcome wondrous New Year, we gladly meet you, and may you be bountiful in good cheer and blessings to us all.”