Birds, fish and other species can’t get rabies

“Everything is nearly copacetic. You were right when you told me that time is one of the best Christmas gifts a person can give. I’ve been spending time with Ma and Pop. I’ve been helping Pop put a jigsaw puzzle together.”

“It sure is. I’m putting it together, and I wasn’t even the one who broke it. I’m using a scissors and a hammer to speed things up. I took Ma and Pop to the Indigestion Inn. They have a buffet there. The food at the all-you-can-eat grab was so bad, I had to eat twice what I normally eat in order to get my money’s worth. The footprints on my ceiling might be telling me that I should cut back on the caffeine. That’s why I eat an apple pie each day to keep the doctor away. I went to one of those dollar stores to do my Christmas shopping this year. Everything is a dollar. I love asking the clerks for price checks, but I’ll never buy another big screen TV there. I marched into the store on their busiest day and asked the clerk to show me something cheap.” 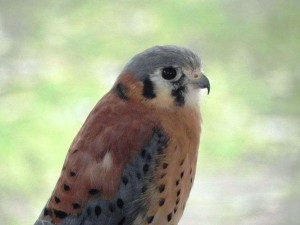 Photo of an American kestrel by Al Batt.

It was one of those sweet days after a storm had passed and the colors were more vibrant than usual. A lone cloud crowded the sun as three large flocks (150 or more birds each) of Canada geese flew overhead. I paused in my snow shoveling endeavors to listen to the geese. They were honking loudly as if each goose was attempting to pass the others. After the three flocks had passed from my sight, a small flock of 40 geese flew over. They were completely silent, as if they were trying to make time.

“Do birds get rabies?” No. Birds, fish, insects, lizards, snakes and turtles don’t get rabies.

“What are the birds that fly up in front of my car on blustery winter days?” They are horned larks, Lapland longspurs and snow buntings. The snow bunting is the easiest to recognize of the group. The white flashing as these birds take flight has earned them the nickname “snowflakes.” The buntings nest in the far north. The Lapland longspur is an arctic nester that looks like a large, dark sparrow. In winter, the female is streaked and the male has a chestnut-colored patch on the back of its head. Their darker overall color and smaller size distinguishes them within a mixed flock. Some horned larks nest here, others nest in the arctic. Horned larks have a tawny color on their backs with light undersides. A horned lark has a black tail, a black bib and cheek patch and a yellow throat. A close look reveals tiny “horns” (feather tufts) protruding on each side of the head.

Marlene Peterson, of Albert Lea, asked where ducks go at night? Ducks use open fields for feeding, a wetland near their feeding area for feeding, washing and drinking, and a roost site for sleeping. Roosts are areas where the ducks feel safe and are seldom disturbed. These rest areas may be far from the feeding sites. Depending on what is available, roost sites are normally medium to large ponds or wide rivers. To avoid predators, ducks often sleep on the water. They sleep with their heads turned back and bills nestled into feathers. The ducks at the edge of a group keep one eye open. They control which side of the brain stays awake and which dozes. This is called a single-hemisphere sleep.

Leon Schoenrock, of New Richland, asked about shrikes in Minnesota. Shrikes are the only songbirds that consistently prey upon small mammals and birds, often storing uneaten prey by impaling it on thorns or barbed wire. This habit has earned the robin-sized birds the nickname “butcherbirds.” We have two species of this gray songbird here. The larger is the northern shrike that has a light gray underside and a darker gray back.

Its wings are black with white patches and its tail is black with white corners. It has a large hooked bill and a narrow, black mask across its face. It has a larger bill and narrower mask than a loggerhead shrike. Northern shrikes occur here during the non-breeding season. The loggerhead shrike, which nests in the state, is similar in appearance, but vacates Minnesota in the winter.

“Why do birds stand on one leg?” It cuts the loss of heat from the legs by 50 percent.

Green Bay plans to combat a downtown rodent infestation in an environmentally friendly way — by using birds of prey. City officials plan to erect nesting platforms next spring for falcons, American kestrels and other birds of prey in the hopes they will control rodents and lessen the need for pesticides.

According to the Climate Prediction Center, December, January and February will be wetter and colder than average.

The new artwork for the 20012-13 Duck Stamp is a male wood duck done by Joe Hautman who has won the contest four times. The proceeds from the $15 stamp secure wetland and grassland habitat.

My thanks to Ed Shannon, a wonderful guy, whose writings have entertained and enlightened.

“There are no passengers on Spaceship Earth. We are all crew.” — Marshall McLuhan

Do good and merry Christmas.