In the era before electrical power home heating could be a real challenge, especially during the colder months of the year.

Folks then relied on the kitchen stove, a fireplace or a stationary heater that used wood or coal as the fuel source. And for many people in the nation there were alternative heaters made by a firm in Albert Lea that used gasoline, kerosene and fuel oil as the sources for heat. 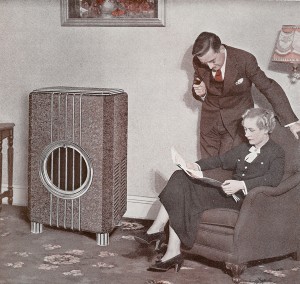 This stylish couple were enjoying the heat from their kerosene burning circulating non-electrical heater as depicted in the 1937 American Gas Machine catalog.

This local firm was the American Gas Machine Co. From 1896 to 1947 the firm specialized in a wide variety of products for consumers, especially those living in rural areas where electrical service wasn’t yet available.

The map shown, courtesy the Freeborn County Historical Museum, proves Albert Lea’s American Gas Machine Co. was a national firm. The map shows there was a branch office on Hollis Street in Oakland, Calif., and another branch office on Furman Street in Brooklyn, N.Y. The map also shows that parts of Texas, plus Mississippi, Alabama and Tennessee were divided between two of the districts.

One line of those products was the American Radiant Heater, made in several versions.

The firm’s 1937 catalog described these space heaters with, 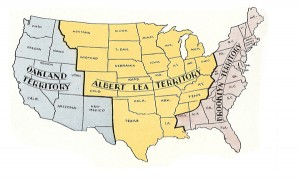 “In the American Radiant Heater, the intensely hot blue gas flame burns in heating elements made of special fire clay, one of the fastest heat-radiating substances known. These bright glowing clay elements project their intense, sunlike heat throughout a large room. The heat is further intensified by a brightly polished reflector, enclosing the top and base of the radiants, as well as the sides. …

“All American Radiant Heaters have removable fuel tanks. It is not necessary to carry the entire heater to the fuel supply for filling. All working parts of the heater — lighter, pump, generator, gauges, etc. are attached to the tank. This is a great convenience in making repairs or adjustments.”

Also worth noting is avoiding possible spillage if the gas was brought into the home for filling the heaters. 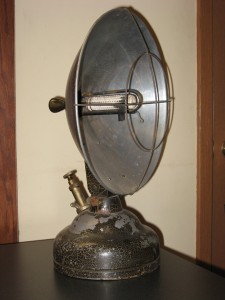 One of the products once made by American Gas Machine Co. is this cordless and portable Readyglo heater. The base contains the fuel tank. It’s now part of a special display area at the Freeborn County Historical Museum.

This line of products could be described as non-electrical gas and kerosene space heaters without the fans.

A related product was the American Readyglo Heater. The 1937 catalog declared, “The Readyglo is a radiant heater built on a smaller scale. It has a fire-clay heating element, backed by an adjustable, polished aluminum reflector. It focuses its healthful, flowing, sunlike heat just where you want it. Like the American Radiant Heater, its heat contains a great volume of the health-giving infra-red rays. It is recommended for the bathroom, the nursery, the sick room, the sun porch, bedroom, library, summer cabins, etc.”

Next week: Information about still another American Gas Machine line of products for home use, plus a photo of this former firm’s buildings that are still a part of local life.