Editor’s note: This is the last of a three-part series.

In the era before electrical service became a part of household life, ironing clothes could be a real challenge.

In the 1930s this building complex on West Front Street was a part of the American Gas Machine Co. Letter A was then Prentice Avenue and its seven homes. Now the area is part of a new loading dock area. Letter B was the tracks of the Minneapolis & St. Louis Railroad. This trackage was recently abandoned by the Union Pacific Railroad. Letter C was a M&StL branch line to Twin Lakes, Emmons and Fort Dodge, Iowa, that was abandoned in the 1970s. Through the years this complex later became a part of Queen Stove Works, King Seeley Thermos, and now Lou-Rich. -- Photo courtesy Freeborn County Historical Museum

There were two solutions to cope with this continuing task years ago.

One was to use an iron with a solid metal base and handle that could be placed on a hot stove to become heated. There was also a small stand or rack where the iron could be placed while changing clothing items on the ironing board. Sometimes there would be a second iron on the stove to be used when the first iron cooled off.

The second option was a gas-fueled iron made in Albert Lea by the American Gas Machine Co. This firm had at least three versions of these irons with small attached fuel tanks, as confirmed in a display at the Freeborn County Historical Museum.

These gasoline irons were described as being simple with rugged construction and producing heat without unpleasant odors while operating. The fuel capacity was a half pint, enough for an ordinary ironing session. For one of the irons the firm’s catalog indicated the ironing session was four to five hours.

These irons, plus other household products made by American Gas Machine Co., quickly became obsolete as soon as a community or rural home gained electrical service. As a result, this firm began to lose business in the U.S. in the later part of the 1930s as rural electrical services became more prevalent. Yet, one part of the firm’s product line was able to maintain its volume of sales. This was based on items intended for use by sportsmen and campers.

When the war ended in 1945 the military contracts were terminated. And by 1950 American Gas Machine Co. became part of Queen Stove Works. Thus, the era of locally-made gasoline, kerosene and fuel oil non-electrical products ended. 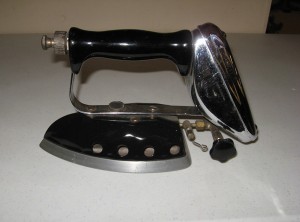 The cordless American Self Heating Iron was a very popular item in the 1930s, especially for homeowners who didn’t yet have electrical service. This iron was then made in Albert Lea by the American Gas Machine Co. -- Ed Shannon/Albert Lea Tribune 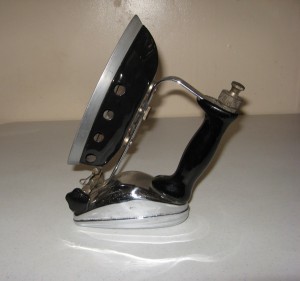 One model of the American Self Heating Iron had a rather unusual feature. The fuel tank at the rear of the iron could also be used as a stand when the unit wasn’t being used. -- Ed Shannon/Albert Lea Tribune