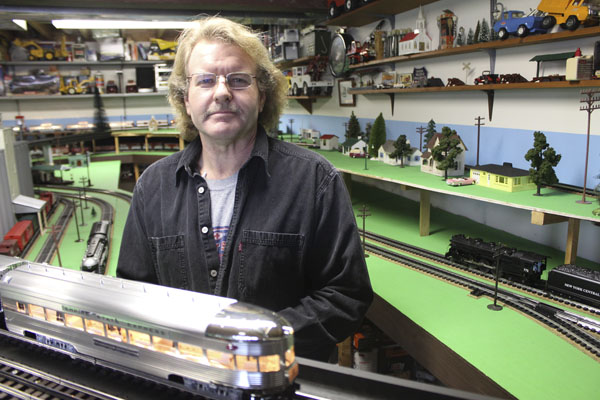 Marty Groeneweg stands amid his train collection Thursday in a room in his basement. His favorite two trains are the black steamer on the right and the diesel passenger in the foreground. Both are New York Central Railroad models. The New York Central is his favorite railroad. -- Tim Engstrom/Albert Lea Tribune

There are more homes in Albert Lea with rooms dedicated for model trains than one would imagine, says the man who organizes a train show every year at Northbridge Mall. 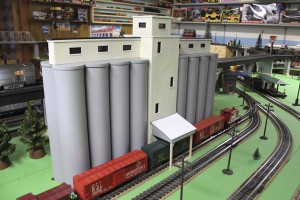 Marty Groeneweg has constructed much the set for his model trains himself, including this grain elevator and the elevated railroad behind it.

“I’ve been a modeler a pretty long time, and I’m impressed myself,” Monson said.

Many model railroad enthusiasts simply purchase their sets. Some go farther and build them.

Groeneweg, 51, has constructed steel bridges to cross the doorway. He built a grain elevator. He built an elevated railroad. He built a wooden trestle. He built a rockface from shingles. He bent tracks to meet his needs. He built a wall that looks like sandstone bricks.

When he built his house in 1999, he made sure beams were taken out for a room on one end of his basement. He then went to work on making the 432-square-foot room ready so he could set up his trains on O-scale tracks. The many tight turns and custom work required measuring and measuring again and doing the math and double checking it.

“It took a lot of fusswork,” Groeneweg said. 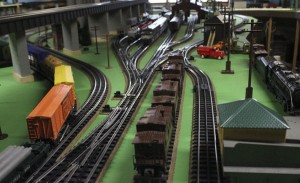 His favorite railroad is the New York Central. His model train room depicts the late ’40s and early ’50s when railroads were converting from steam power to diesel. Groeneweg’s favorite engine is his Hudson Steam Engine with New York Central on it. His second-favorite is a streamlined New York Central passenger train with a diesel engine.

It takes a 275-watt transformer to power Groeneweg’s model trains. The tracks have feeder wires every four to five feet to keep electricity running to the trains.

Groeneweg, a yard driver at the Sam’s Club in Bloomington and part of the crew at Kwik Trip in Albert Lea at Main Street and Garfield Avenue, plans to participate in the 16th annual Model Railroad Show & Swap Meet this weekend at Northbridge Mall. He won’t have a display there, but he does plan to sell off some of his model trains, tracks and supplies.

“I’m really just selling the things I think I can part with,” he said.

Monson said many of the model train enthusiasts collect equipment, play with it, then sell it again. 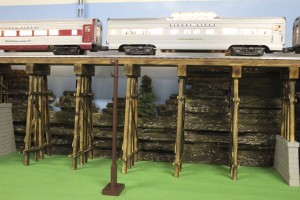 Marty Groeneweg built this wooden trestle and the rockface behind it.

“It’s just stuff trading hands back and forth,” he said.

The show features 70 tables and 20 vendors, with seven operating displays on the four major scales: N, HO, O and G.

John Leucke, a Faribault author with a new book out about the Rock Island Railroad’s history in Minnesota, will be there on Saturday.

The best part about collecting trains, Groeneweg said, is running them after doing all the building.

“It’s really good if the tracks work the first time and the train goes around without falling off,” he said.

He said model trains are particularly fun in the winter. He can do what he loves even if the snow is flying sideways out his window.

And, of course, Groeneweg and Monson said they both enjoy when their grandchildren visit. The first thing the kids want to do is see the trains run.