“Everything is nearly copacetic. I’ve learned that when they pass a dessert tray, to always take a piece because you never know if that tray will come around again. I almost hit a deer yesterday. I saw the deer crossing sign but I never thought that one might come from the other direction. Later, I had a near death experience that has changed me forever. I went horseback riding. I mounted up and rode like the wind. I should have been a rodeo cowboy. Everything was going fine until the horse started bucking. I called the nag Oliver Twist, Nicholas Nickleby and David Copperfield.”

“Why did you do that?” I wonder aloud.

“I was giving it the Dickens. I tried to hang on, but I was thrown off. As I slid from the saddle, my foot caught in the stirrup. I fell headfirst to the ground. My head bounced, hitting the ground harder each time, as the horse galloped along with my foot stuck in the stirrup. The stupid horse not only wouldn’t stop, it wouldn’t even slow down.”

“Just as I was about to give up hope and lose consciousness, the assistant manager of the Mighty Maul Mart came outside and unplugged the ride.”

From here to there 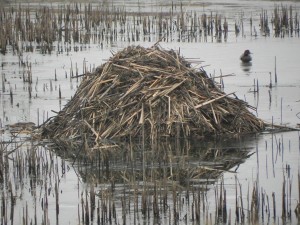 Photo of a muskrat mound by Al Batt.

I was on my way. We all are. While going from here to there, I stopped and watched muskrats eating aquatic plants that they brought up onto the ice from the bottom of a pond. It’s the way they earn a living. Muskrats live in marshes, streams, rivers, ponds and lakes. Muskrats are essentially vegetarians. Because they do not hibernate and remain active all winter, food must be readily accessible even under ice and snow. Muskrats prefer aquatic stands of cattail, bulrush and pond weeds, both for the green shoots during the growing season and for the foraging for tubers and roots during late fall and winter. Muskrats readily eat weeds, grasses, white clover and corn. On occasion, they eat clams, snails, frogs, crayfish, fish and salamanders. A muskrat burrows into the bank of a creek or pond, or it may gather vegetation and build a house in shallow water. The muskrats I watched had built dome-shaped mounds. They were low bidders on the projects. Cattails and bulrushes were piled in a conical form three to four feet high and five to eight feet in diameter. Passages into the house were underwater. Each lodge contains at least two exits. The thick walls act as insulation. The muskrats were eating a Thanksgiving meal. Each meal is that to an animal.

I saw a meadowlark land upon a sign indicating an approaching turn for those wishing to travel a certain county road. The bird’s vibrant yellow breast was pleasantly displayed like a cardigan sweater purchased at a fine store. This colorful member of the blackbird family uses a feeding behavior called “gaping,” wherein it inserts its bill into soil or other substrate and then opens it bill to create a hole allowing access to insects and other food items. The western meadowlark is the state bird of Kansas, Montana, Nebraska, North Dakota, Oregon and Wyoming.

A lake hosted many buffleheads. The chunky bufflehead is the smallest diving North American duck. Males seldom exceed a pound and the females are smaller. Each male had a black back, white underside, and a dark purple-green head with a large white patch covering the back of the head. The females were mostly dark brown on the back, head and wings, with paler gray undersides. The name bufflehead is a corruption of the original name “buffalo head,” a reference to the disproportionately large head of the drake. The ducks’ main breeding area is the boreal forest and aspen parkland of Canada and Alaska. Their range is limited by woodlands and the distribution of the flicker, which is their main source of nesting cavities.

In the midst of glorying in the delights of nature, I glanced at my pocket watch. It was time I was where I needed to be.

“How was your drive?” I was asked when I arrived at my destination. A common question to one who travels our less than convivial roads covered in snow and ice.

That was far from the truth.

Dick said to Jane in the classic Dick and Jane books, “Look, Jane, look.” Dick was a visionary, but he couldn’t have done it without Jane. This appears to be a snowy owl year. If you keep looking, you might see one of these beautiful visitors from the Arctic tundra.

The snowy owl is a large, diurnal owl with a rounded head, yellow eyes and black bill. Adult males may be nearly pure white. Females and young birds have some dark scalloping. A snowy owl is 20 to 28 inches long with a 49 to 57 inch wingspan. It weighs 3 1/2 to 6 1/2 pounds. Its thick plumage, feathered feet and coloration make it well adapted to life north of the Arctic Circle.

This is from an excerpt from an article in The New Yorker by John Seabrook titled, “Crunch.”

“By the nineteen-sixties, most supermarkets carried three types of apple: McIntosh, a small, tart apple that John McIntosh had found growing on his farm in Ontario, Canada, in 1811; Red Delicious, originally the Hawkeye, a sweet apple discovered on a farm in Iowa in the eighteen-seventies; and Golden Delicious, found in a hay field in West Virginia in the eighteen-nineties.”

The interesting article went on to say that the University of Minnesota made more than $10 million in royalties from the Honeycrisp apple released in 1991. That makes it the third most valuable invention ever produced there. The Honeycrisp is the state apple of Minnesota.