Snowy owls are abundant this year

“Everything is nearly copacetic. I don’t believe anyone but me and I’m a liar. Friends are always welcome at my house, but a relative needs to make an appointment. Pop’s hearing aids quit working. He thinks everyone has become a mime. I have to shovel out my snow blower, but I love Christmas. I cut down my Christmas tree. Unfortunately, it’s a maple. It looks like an antique tree. I can tell it’s a tree because when I look at it, I can’t see the forest. I ran out of tinsel, so I trimmed the tree with spaghetti. I get all Santamental this time of year. I duct taped my stockings by the fire. I shopped with tainted money. Taint mine. I did most of my shopping at the Lost and Found. If I hide the gifts well enough around the house, I’m able to have Christmas all year long. This year, I plan on being a little more disciplined and will try not to eat more at Christmas than I did at Thanksgiving. I don’t mind shopping. I love lines. They bring people together.”

“I want everyone to save their receipts, to know that naughty is the new nice, and to have a massive merry Christmas.” 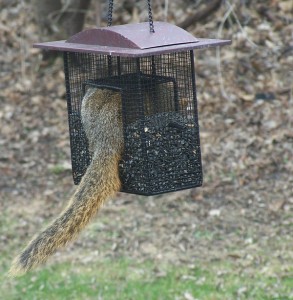 Photo of another squirrel-proof feeder by Al Batt.

There are more snowy owls than usual this year, but how do you find one? A white bird can be difficult to find in a maze of white, so look hard. Look for snow that blinks. We see what we look for. The snowy owl is a tundra dweller, so don’t look for it perched in a tree. It typically is found on the ground, utility pole, fence post, hay bale or building. An airport is another attractive site for this beautiful visitor. Many of the owls were hatched last spring.

I listened to Dr. Gerald Niemi of the Center for Water and Environment of the Natural Resources Institute at the University of Minnesota, Duluth, as he spoke of Hawk Ridge at the Minnesota Ornithologists’ Union Paper Session.

The North Shore of Lake Superior is one of the premier migratory routes for raptors in North America. Reasons for this concentration of birds are many, but the presence of Lake Superior and topography play major roles. As migrating birds fly south, they seek cover and food. Lake Superior presents a barrier void of food and shelter. If birds approach the lake during daylight hours, they change their course to follow the shoreline. If birds that fly during the night find themselves over the lake at dawn, they reorient to the nearest shoreline. This movement coupled with the prominent ridgelines that parallel Lake Superior act as funnels to cause a massive congregation of birds. Because of this, Hawk Ridge was a favorite place to shoot raptors in the 1920s through the 1940s. Now birds are counted and are shot by only cameras.

Hawk Mountain in Pennsylvania is perhaps the most well known hawk migration site, but its numbers don’t approximate those of Hawk Ridge. The top three North American locations would be Hawk Ridge, Corpus Christi and Holiday Beach in Ontario. The count at Hazel Bazemore County Park near Corpus Christi is the largest.

Broad-winged hawks account for approximately half the raptor total at Hawk Ridge. In the last 20 years, their numbers along with those of turkey vultures, rough-legged hawks and northern harriers have remained stable at Hawk Ridge. Cooper’s hawks (at its northern limit) and northern goshawks are declining. Osprey, sharp-shinned hawk, red-tailed hawk, American kestrel and merlin numbers are likely declining at Hawk Ridge. Bald eagle, golden eagle and peregrine falcon numbers have increased. Pre-1991 average counts of bald eagle were 98 a year, golden eagles 10, and peregrine falcon 15. Those average annual numbers have risen since 1991 to 3000, 130, and 69 respectively.

“I don’t see as many kestrels as I once did. Is the population declining?” They are declining nationwide due to the loss of habitat and pesticide usage.

In a paper published in the journal PLoS Biology, scientists at Dalhousie University in Nova Scotia estimated there are 8.7 million species on the planet, plus or minus 1.3 million.

Christmas Day was the day of the Side Hunt, a traditional killing binge in which Americans shot as many birds as they could. Frank Chapman conceived a better way to count birds that didn’t involve gunning them down. If a bird was seen, it was counted. That way, the bird might be counted for more than one year. In 1900, Chapman led 27 others on the first Christmas Bird Count. Citizen science brings a great deal of personal joy to the counters.

“Life is not measured by the number of breaths we take, but by the moments that take our breath away.” — Maya Angelou

“Laughter is a part of the human survival kit.” — David Nathan