Stolen seeds have the best taste

“Everything is nearly copacetic. Feed me nails and call me Rusty. It’s time for me to get a haircut. I’m almost healed from the last one. I changed my cell phone plan to Worthless Wireless. It doesn’t work, but it’s cheap. When I was a kid, I had everything handed to me on a plate. Soup was a nightmare. I took Pop in for a checkup. He was feeling like the slowest wildebeest in the herd. I needed to change his woe to giddyup. I always take the elevator at the clinic. I might meet someone with a cold on the stairs. He told me that even after all those years of marriage, Ma still takes his breath away. The only difference is that now she uses a pillow. Christmas shopping was easy for me. I had myself gift-wrapped. What a busy time of the year. They should have Christmas twice a year — December and July.”

“It would stimulate the economy just like a certain gas station is. I drove by a sign that read, ‘Last chance for $3.25 gas.’ So I pulled into the station and filled up. It was my last chance. The next station I drove past was selling gas for $3.15.” 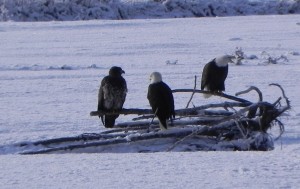 Photo of a young bald eagle with two adults by Al Batt.

I was in the third grade. We were doing a small play featuring animals. Kids got to be lions, tigers and bears. Oh, my. When it came time for some students to play the part of a bird, every child wanted to be a bald eagle.

We were in a large store. It’s not my native habitat. My wife was looking for an ankle watch for her yoga instructor. My job was to stay near the shopping cart. I picked up some binoculars from a sales counter and was peering at various things through them.

“May I help you?” asked a clerk, trying to be helpful.

A hairy woodpecker grabbed a sunflower seed from the feeder and flew to a dead mulberry tree in my yard. There it wedged the seed into a chink in the decaying tree. A blue jay had been watching. It flew in and frightened the woodpecker away. The blue jay ate the sunflower seed not far from feeders filled with seeds. Maybe a pirated sunflower seed is more flavorful.

Nordean Krueger, of Albert Lea, asks where beavers spend the winter. Beavers live in shelters called lodges. Some build in existing lakes while others build in the newly formed ponds that they created with dams. Lodges are usually cone shaped with underwater entrances and are built along shores. The beavers build from the inside out using mud, grass and branches. Most predators find it difficult to get through the complex network of branches and mud so the beavers are protected. Beavers that live in rivers don’t typically build lodges. They make burrows in the mud of riverbanks. Beavers have thick underfur that keeps them insulated and a thick layer of fat under their skin. Beavers keep their fur waterproof by rubbing an oily substance secreted from scent glands on it.

Tim Palus, of Mankato, asks what the layer under the snow is called. That zone is referred to as “subnivean,” from the Latin for “under” (sub) and “snow” (nives). This space forms when latent heat from the ground melts a thin layer of snow above it, leaving, in places, a layer of air between the ground and the additional snow cover. Subnivean animals include small mammals such as mice, voles and shrews that rely on winter snow cover for survival. These mammals move under the snow for protection from heat loss and predators. The subnivean zone maintains a temperature of close to 32 degrees Fahrenheit regardless of the temperature above the snow cover, once the snow cover has reached a depth of at least six inches. The sinuous tunnels left by these small mammals can be seen from above when the snow melts to the final inch or so. Some winter predators such as foxes and large owls can hear prey through the snow and pounce from above.

Karen Wright, of Mankato, asks what waterfowl has been most commonly pictured on duck stamps. Federal Migratory Bird Hunting and Conservation Stamps, commonly known as duck stamps, are pictorial stamps produced by the U.S. Postal Service for the U.S. Fish & Wildlife Service. They are not postage stamps. Created in 1934 as the federal licenses required for hunting migratory waterfowl, duck stamps have a much larger purpose today. Duck stamps are a vital tool for wetland conservation. Ninety-eight cents of every dollar generated by the sales of duck stamps goes directly to purchase or lease wetland habitat for protection in the National Wildlife Refuge System. A duck stamp serves as an entrance pass for National Wildlife Refuges. Duck stamps ($15) are sold in many post offices. There have been 44 species of waterfowl depicted on the stamps. Mallard, canvasback and northern pintail are the most often painted, appearing five times each.

“Does any bird eat the red milo that’s in some seed mixes?” Yes. Gambel’s quail, curve-billed thrashers and Steller’s jays love that seed. None of those birds are found in Minnesota.

“God writes the gospel not in the Bible alone, but on trees and flowers and clouds and stars.” — Martin Luther

“All seasons are beautiful for the person who carries happiness within.” — Horace Friess