We gauge passage of time by weather events

“Everything is nearly copacetic. I still remember that Paul McCartney song as if it were yesterday. The Vikings’ game was so bad, I not only turned off my TV, I went over to Weasel’s and turned off his TV. Weasel took that poorly and kicked up a fuss. Will Rogers never met Weasel. Weasel is the gristle in life’s stew. Despite Weasel, it has been a good year. I hooked the largest walleye I’ve ever seen this year. It wasn’t easy. The walleye is a wily fish. This one was gigantic. I could have showed it at the state fair. By the time I pulled it into the boat, the sharp walleye had convinced a carp to take its place on the hook. I feel fortunate to have seen the walleye before the exchange. This time of year is hard on me. I’ve been dishonorably discharged from Old Navy. I enjoy shopping but it makes me as tired as an 18-wheeler.”

“It can be exhausting,” I interject.

“So can everything else. I don’t even have to think about doing something in order to become tired. Once upon a time, I wanted to change the world. Now I’m not even sure that I want to change my socks.” 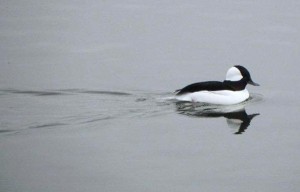 Photo of a buffle-head drake by Al Batt.

I was on the road when the snow hit.

I am always on the road when the snow hits.

Traffic moved slowly through the snowy night. I marched in an automotive parade without much conscious thought.

The snow provided a beauty that not only challenged travelers, but also challenged the imagination. Without winter, the other seasons would have diminished meaning. Where the sky is never gray, where the bitter cold never stings an exposed ear, and where the snow never falls would be a place that would limit life’s experience.

When winter hits, nature gets our attention.

I know that it is not officially winter, but to my way of thinking, Dec. 1 is the start of winter. Many meteorologists go by that date. On Dec. 1, I hear, “Gentlemen, start your snowblowers.”

I love walking in all seasons. I hiked in the hush of a cold morning and remembered the words written by John Muir, “In every walk with nature one receives far more than he seeks.”

I watched a great blue heron hunt while I walked. This bird, called a “shitepoke” by many, eats most everything that won’t eat it. Because of this appetite, I have heard it referred to as the “Tyrannosaurus rex of the bird world.” I wondered why the heron wasn’t winging its way southward. A bird weighs the presence of food against the perils of migration and makes its decision. Only the bird knew why it was here with me.

There are more mysteries than time. My thoughts linger with the unknown.

Wildlife officials in Oklahoma are studying the state’s growing black bear population. They have been trapping bears by using various foods as bait. They’ve had the most success with pastries. No word on whether the bears prefer glazed, filled or sprinkled. I suspect they might enjoy a bear claw.

In December, grasshoppers swarm Uganda after seasonal rains. Ugandans catch, fry and eat thousands of grasshoppers. They clean the insects by removing the legs and wings, frying the rest with some chopped onions and seasoning them with curry powder.

The downy woodpecker is found in 49 states, all but Hawaii.

It is believed that apples originated in Asia and were first cultivated in the Tien Shan Mountains of eastern Kazakhstan. The Seed Savers Exchange near Decorah, Iowa, grows about 700 varieties of apple trees.

Unlike most other diving ducks, which run across the water before taking off, buffleheads fly straight up from the water.

Hummingbirds migrate to exploit brief windows of opportunity in habitats that cannot support a year-round population. Hummingbirds are aware of the photoperiod (the amount of daylight) and this triggers their migration. Other scientists believe that as the flowers bloom and insect populations swell in the spring and decline in the fall, the birds follow the food chain. So the hummingbirds migrate north to take advantage of the bounty of blooms and insects that spring brings. This provides the food and energy required for courtship, mating, nesting and raising young.

The schedule for the 2012 International Festival of Owl in Houston, Minn., is online at www.festivalofowls.com. It runs March 2-4 and includes a live snowy owl. Speakers include Paul Bannick (author of “The Owl and the Woodpecker”), Laura Erickson (author of “Twelve Owls”), the Rev. Lane Zaffke (talking about owls in the Bible), and Karla Bloem (festival coordinator) who along with Alice the Great Horned Owl was on Animal Planet recently.

These trips are on Dec. 17 and Jan. 7. Both field trips will begin at the National Eagle Center in Wabasha at 1 p.m. with a brief classroom session covering the identification of golden eagles, followed by a caravan to a field site to view golden eagles in the wild. Contact Education Director Scott Mehus at 651-565-4989 or scott@nationaleaglecenter.org.

“If you love life, don’t waste time, for time is what life is made up of.” — Bruce Lee

“With all things and in all things, we are relatives.” — Sioux proverb