Memorial services for Floyd Leland Wombold will be held at 2 p.m. Thursday at the First Presbyterian Church in Albert Lea. The Rev. Dwight Netzer will officiate. Visitation will be one hour prior to the service at the church. To sign the online guestbook go to www.bayviewfuneral.com. 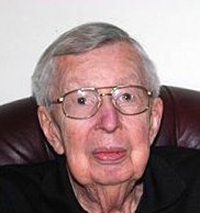 Floyd Leland Wombold was born March 21, 1920, to Leslie and Laura (Oyler) Wombold in Barberton, Ohio. He grew up in Barberton where he graduated from high school. Floyd served his country in the United States Army during World War II and the Korean War. During that time he interviewed Dwight D. Eisenhower. On Feb. 14, 1942, Floyd was married to Judith Reynolds in Lorain, Ohio. They were blessed with two children and married 64 years. After his time in the service, Floyd worked as a radio announcer using the name Dick Donavan. He then worked in advertising most of his career. The couple came to Albert Lea in 1977, when Floyd worked for Unico. He was an active member of First Presbyterian Church and Kiwanis and enjoyed coffee at Hy-Vee. Floyd enjoyed time spent with his family and made yearly trips to Colorado to visit his daughter, grandchildren and great grandchildren.

In lieu of flowers, memorials are preferred to the First Presbyterian Church.