ALDEN — Alden-Conger (4-5) played a rough first half against Lyle-Pacelli (6-3) on Thursday at home.

Brooke Reyerson was down and out with a knee injury that affected the whole team’s spirit. 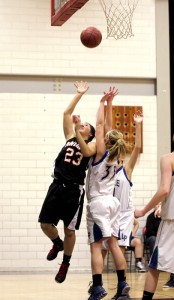 “Any kind of momentum we had, it just sucked the life out of us,” Knights coach Jenny Hovendick said. “It was a tough thing to see and have to deal with.”

Scoring seven points at the end of the first half, Alden was down 19-26. The game finished with a Lyle-Pacelli win 56-43.

The second half looked more promising as Taylor Martin scored nine points, Annie Tomschin two, Brittany Waters two and Leisel Theusch one, in the first eight minutes to bring the lady Knights to a 33-32 lead.

The one-point lead didn’t last more than a minute when Lyle-Pacelli went on their own nine-point run with less than 10 minutes on the clock.

“Sometimes that happens in games,” Hovendick said. “You expend all this energy to get back into the game and once you get back in there’s this let down and you don’t maintain the focus.”

Alden-Conger came within eight points of the lead with just under three minutes left of the game, but with the help of fouls Lyle-Pacelli picked up another eight points for the win.

“Lyle has some really nice guards that did some things that were tough for us to guard,” Hovendick said. “There were stretches in the game though where Martin and Theusch were pretty dominant down low. Lyle-Pacelli didn’t seem to have much of an answer for them, but we just couldn’t get the ball to them enough.”

The Knights play at home again tonight against Truman at 7:30 p.m.