Knights leave G-E in the dark 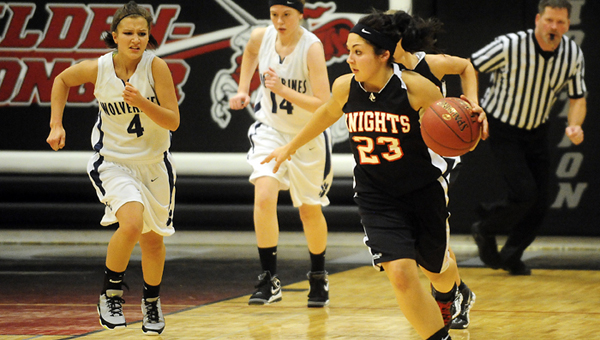 ALDEN — One week away from the start of its conference showcase, Alden-Conger’s girls’ basketball team needed a confidence lift.

The Knights (8-12) had lost seven of eight games heading into Monday’s matchup with Glenville-Emmons (0-15), and a game against the winless Wolverines couldn’t have come at a better time.

Taylor Martin scored 18 points and Brittany Waters 12 for the Knights, which put the Wolverines away early with a 29-2 run during the first half. Alden-Conger led 36-8 at halftime and won 69-24.

“Confidence is a big thing,” Knights first-year coach Jenny Hovendick said. “We’ve played some really good games against good teams and come out on the losing end, and we’ve played some poor games. So being able to come out, build confidence and see the ball go through the hoop is going to be what helps us going forward.”

The Knights’ 69 points was its highest total of the season, as the team eclipsed its scoring average (43.5) less than two minutes into the second half.

Alden-Conger’s starters, led by Martin, were aggressive offensively to start the first and second halves. Martin scored an and-1 layup and converted the free throw to give the Knights its first lead at 3-2 and cue 17 unanswered points, and a three-point play to start the second began a 12-1 run out of the break.

“We’ve started doing some different things in our offense to try and help (Martin) get into those situations, and she’s really flourished,” Hovendick said. “She has a knack for getting open, getting the ball inside and she knows how to finish with contact.”

While the Wolverines trailed 34-5 after five straight points by Martin late in the first half, the team played better offensively in the second. After a strong start by the Knights out of halftime, Glenville-Emmons outscored Alden-Conger 15-12 during an 11-minute stretch.

Six different Wolverines scored during that run, including Madi Ziebell, who knocked down two jumpers and finished with a team-high eight points, as Glenville-Emmons cut the Knights’ lead to 60-24.

“Every game I see improvement,” said Wolverines coach Lisa Ziebell, who’s team was without one of its top guards, Kayla Woodside. “It’s just that we can’t put a game together.

“The kids are stepping up and trying to take charge, but the kids who are running the ball have never had to run the ball before.”

Jaden Rasmusson had 10 rebounds for the Wolverines, Noelle Hagen scored five points and Bre Lundmark scored three on a 3-pointer in the second half.

Karina Skov had eight points, eight rebounds and six steals for the Knights, which had 27 takeaways as a team, and Ward scored nine.

Hovendick said after an unfocused performance on Friday in a 44-36 loss to Maple River, she was looking for her team to play disciplined on both ends of the court.

“We really challenged ourselves tonight to crank up the defensive intensity and the focus on the defensive end, and move the ball better on offense so we could get high-percentage shots,” she said. “Finding that concentration was definitely something we had as a goal tonight, and I thought we did a very nice job of it.”

The Knights play again at 7:30 p.m. tonight at Lake Crystal-Welcome-Memorial, and the Wolverines host Lyle-Pacelli at 7:15 p.m.