“Everything is nearly copacetic. I can’t complain. If I do, people don’t listen or they’re happy to hear that I have problems. I’m starting the New Year by trying to lose weight. Aunt Clara had a hip replaced with a slinky in case she should fall on the stairs. She is still prettier than a speckled pup under a red wagon. She talked me into going on a diet. I’d been on that one where I didn’t eat while showering. I went on the tofu diet where I ate everything except tofu. Now I’m on two diets because I can’t get enough to eat on just one. I think I’ll quit dieting and stop eating as much as I want. I worry that I may fade into Bolivian. When I’m between diets, I gain weight in the interim. I put on weight in the outer-rim, too.”

“Have you tried exercising?” I wonder aloud.

“I tried doing sit-ups and discovered that I’m much better at ‘sit’ than at ‘up.’ I rented a treadmill. I spend too much time on it because I won’t stop and ask for directions. The problem is that when I exercise, I burn fat, and when I burn fat it smells like bacon, and that makes me hungry.” 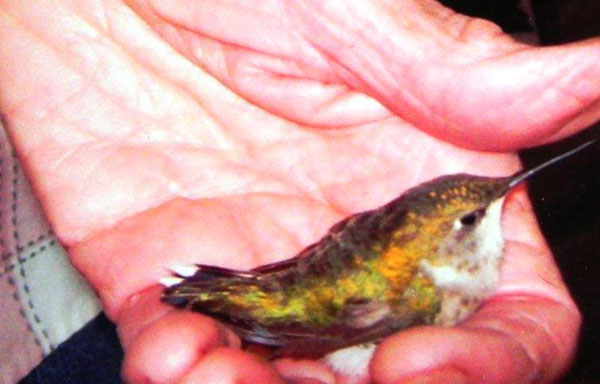 Lois Godeke, of Albert Lea, holds a hummingbird in her hand.

A morning chill seeped into my bones. A flock of cedar waxwings visited the cemetery at the same time I did. Beautiful birds, so perfect in appearance that they appeared to have been carved. They were there to eat persistent fruit — crabapples, highbush cranberries and cedar. I knew the birds had their own agenda (find food), but I hoped they’d be available for the Christmas Bird Count in the area.

I watched a flock of starlings flying through the air. It was a ball-shaped group that morphed as if it were inside a lava lamp. A bald eagle labored through the sky on wings presenting an elegance of motion. Juncos called in minute notes, their tails flashing white in flight.

Nature is a highlight reel.

“Do birds blink?” Yes. Birds have a top and bottom eyelid as we do, but also possess a third eyelid called a nictitating membrane. In most birds, it is translucent or transparent, but is opaque in owls. It provides moisture to the eyeball and protection from physical damage inflicted by foreign objects. It’s drawn horizontally across the eye from bill to ear. Parents close this eyelid when feeding nestlings to prevent a chick from accidentally scratching a parent’s eye. Diving ducks and loons use nictitating membranes as water goggles.

“Do birds’ feet freeze?” Most birds don’t suffer frostbite. There is little fluid in the cells of their feet and their circulation is fast enough that blood doesn’t remain in the feet long enough to freeze. In some species, the blood vessels going to and from the feet are close together, which warms the blood.

“Why is the price of sunflower seeds so high?” There are a number of factors involved. North Dakota, the leading state in sunflower production, suffered rains and floods that kept fields from being planted. Drought curtailed production in southern states and some sunflower fields became cornfields because of high corn prices. Sunflowers, typically more susceptible to insect damage and disease than corn or soybeans, are in demand because sunflower oil is low in saturated fats. About 45 percent of the weight of sunflower seeds is the shells.

“Am I seeing a golden eagle or young bald eagle?” Golden eagles are not great fish eaters, so you’re not likely to see one swooping low over a lake or standing on a sand bar in the river. Golden eagles have feathered legs. Young goldens often have white patches under the wings and at the base of the tail, but lack the white mottling on the body of a young bald eagle.

Jim Robinson, of Mankato, writes, “My wife and I were at the Eagle Center in early December. It was amazing to see the large number of eagles roosting and flying near the Chippewa/Mississippi confluence just east of Read’s Landing. How is it that none of the eagles paid any attention to the waterfowl gathered there in large numbers? The ducks showed no fear of the eagles.” Ducks are able to know somehow when eagles are hunting. How, I don’t know. They are good at reading body language. The eagles are more active when hungry and when perched don’t present much of a threat. Eagles are most likely to take sick or injured waterfowl (other than coots — they love to prey on them whenever possible) so those birds would be the ones that need to worry the most. As for the eagles, they are primarily fish-eaters and might have been finding enough fish to curb their appetites.

The Cornell Lab of Ornithology’s Project FeederWatch for 2010-11 showed the chickadee as the most common bird at the feeders. It was followed in order by the downy woodpecker, blue jay, dark-eyed junco, white-breasted nuthatch, American goldfinch, hairy woodpecker, northern cardinal, house finch and house sparrow. House sparrows and European starlings are showing a decline and Cooper’s hawks are being seen at more feeders than ever before.

Feral cat colonies bring together a series of high-risk elements that result in a sort of perfect storm of rabies exposure, according to Steve Holmer, senior policy analyst at American Bird Conservancy. Outdoor and feral cats that number at least 95 million in the United States are responsible for killing an estimated 500 million birds annually. Outdoor cats are responsible, in part or in whole, for the extinction of at least 33 species of birds.

“Everybody needs beauty as well as bread, places to play in and pray in, where nature may heal and give strength to body and soul.” — John Muir

“We spend January 1 walking through our lives, room by room, drawing up a list of work to be done, cracks to be patched. Maybe this year, to balance the list, we ought to walk through the rooms of our lives… not looking for flaws, but for potential.” — Ellen Goodman