Owls multi-task while looking for prey

“Everything is nearly copacetic. The fingernail on the little finger of my left hand pulled up lame, but I’m still in the running to win The Last Needle on the Christmas Tree Contest and my sister Cruella found a perfume that makes men fall at her feet. She sprays it in their eyes. I have a lot of work to do.” 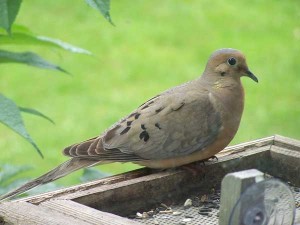 Photo of a mourning dove by Al Batt.

“Shouldn’t you be doing it?” I suggest.

“I like my work undone, but you’re probably right. You were due. Work isn’t an easy horse to ride. I should be changing the oil in my computer and there are many apples still hanging onto the trees. I need to hold a pig up to the branches of those apple trees so the pig can eat. It’s the way I slop the hogs. The fly in the oinkment is that the more the pig eats, the heavier it becomes. It’s all I can do to hold it. By the time the pig is done eating, it’s big enough to plow with.”

“Isn’t that like raking the leaves while they’re still on the tree? That’s not only an incredible amount of work, but isn’t it time-consuming to feed a hog that way?” I ask.

A slice of moon hung from the stars.

Moon shadows cavorted. A great horned owl became the voice of not only a tree, but of the night. In Minnesota, the owl’s courtship and territory formation begin in winter, usually January or February. Its call was a suggestion of warmth on a cold night. The hooting owl, with eyelashes, and feathered feet and legs, is multi-tasking. While setting up household, it keeps an eye out for furry sausages like voles or smelly meals of skunks. Though the female owl is larger than her mate, the male has a deeper voice. I smelled wood smoke. Something wild made a sound of passage. I suspected a moonraker or a cloud-scratcher, but saw nothing overhead. The owl hooted, “Who’s awake? Me, too.”

There was no reply.

Last summer, I saw a cardinal assailing its image in a gazing ball in a garden. The gazing ball has its roots in the 13th century when skilled craftsmen created it in Venice, Italy. As time passed, the colorful ball became a permanent fixture in the European garden. Legends formed about the mysterious powers of the ball. The globe was supposed to bring happiness, good luck and prosperity to those who owned it. The ball allegedly wards off evil spirits, misfortune, illness and witches. The ball should be placed near the entrance to a house so that a witch wouldn’t be able to get past her reflection. She would be unable to tear herself away from her image. Others believe that a witch cannot bear to see her reflection. It may work on witches, but I’m glad that it doesn’t keep cardinals away.

“When is the breeding season for rabbits?” Generally, rabbits mate from February through August. They act as if they are dancing when the urge hits. Females make a nest by scraping a shallow depression in the ground and lining it with grass and fur. Three to six young are born naked and blind after 28 to 32 days. The young weigh about an ounce and measure 4 inches at birth. They grow rapidly. By five weeks, they are weaned and independent. Rabbits are considered mature at four months. Females may have as many as four litters each year and can mate almost immediately after giving birth. Because cottontails have many predators, only about 1 percent of all rabbits reach 2 years of age. Rabbits have territories of 5 acres or less and are capable of running 18 miles per hour.

“Don’t mourning doves migrate?” Most mourning doves do migrate, but not all. We typically have some that overwinter here, but some of those could have migrated here from farther north. Why they stay is open for speculation. Migration is a perilous journey.

“Do female wild turkeys have beards?” It can be difficult to distinguish males from females. The toms are noticeably larger and have a sharp spur on the back of their legs. The spurs are sharp and up to two inches long. They use the spurs for fighting with other males during breeding season. The males also have a beard, which is a collection of long thin feathers resembling hair, clustered in the center of the breast and hanging down like a beard. An adult male can have a beard up to a foot long, but most are shorter. Some studies have shown that 10 to 20 percent of hens also have a beard.

“Where are the birds? I see no hawks or cats, but there’s no one at my feeders.” Without snow, there is an abundance of wild foods (seeds and fruits) available. When the weather is warm, some birds don’t need as much food as they do when the weather is colder.

Coyotes are found in every state but Hawaii. Some cemetery managers and golf course operators welcome coyotes because they help control rodent, geese and deer populations.

In Utah, a hunter was shot when his dog stepped on his shotgun. The man had neutered the dog, but revenge is not believed to have been the motive.

Folklore says the buckeye is a good luck charm and brings relief from the pain of arthritis and rheumatism.

“The truth of the matter is, the birds could very well live without us, but many — perhaps all — of us would find life incomplete, indeed almost intolerable without the birds.” — Roger Tory Peterson

“The fact that I can plant a seed and it becomes a flower, share a bit of knowledge and it becomes another’s, smile at someone and receive a smile in return, are to me continual spiritual exercises.” — Leo Buscaglia