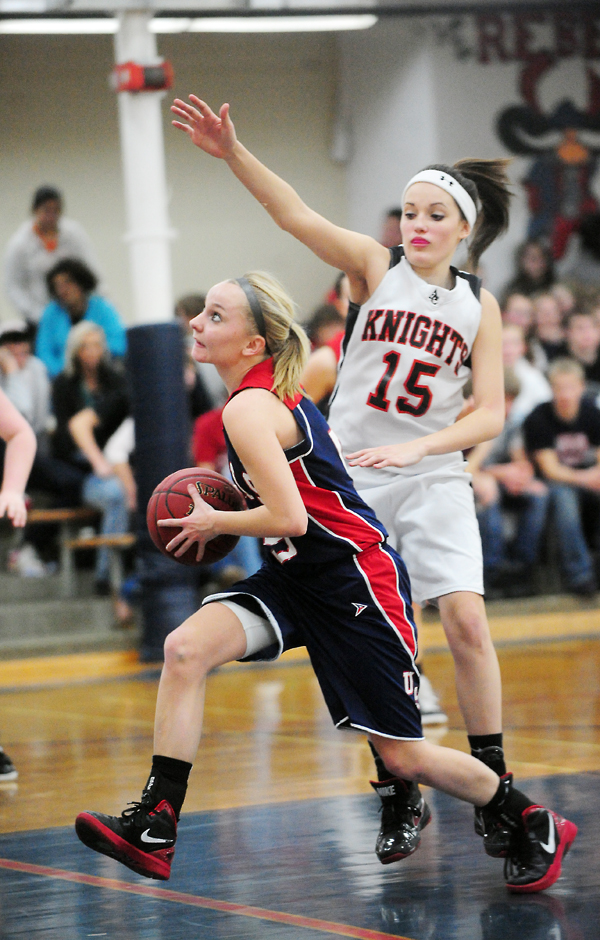 WELLS – The United South Central girls’ basketball team got plenty of easy looks at the basket on Friday night.

The Rebels turned steals and offensive rebounds into layups and put the game away on a 47-11 en route to a 69-30 win in Wells.

Amanda Allis had 19 points and a school-record nine blocks for the Rebels, and Kristie Ovrebo scored 15.

“We did really well in transition, which is something we’ve been working on,” said Allis, who also had seven rebounds. “Our defense played strong, our offense went smoothly and everything went well.”

The Rebels, which was coming off just its third loss of the season, got second-chance points on its first three 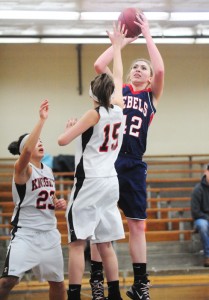 possessions and went ahead 6-0 two minutes into the game. The Knights responded with a 5-0 run, capped by an and-1 layup and free throw by Liesel Theusch, and pulled within 9-7 off a Theusch layup.

From there on it was all Rebels.

“I was just really unhappy because we weren’t doing the things defensively that we’ve been working on since Day 1,” Knights coach Jenny Hovendick said. “That was part of the reason they were getting really good looks at shots. Obviously, they executed really, really well, but we weren’t communicating like we were supposed to and that’s how open shooters got open. They made their shots and we didn’t.”

Ovrebo scored 13 of her 15 points in the first half and burned the Rebels with an explosive inside-out game.

The senior knocked down two foul shots to give the Rebels an 11-7 lead and scored a layup three minutes later to build a 24-10 margin.

After Theusch a 13-2 run with a layup at the eight-minute mark, Ovrebo drove the baseline and made an and-1 layup and free throw. She scored six more points over the half’s final three minutes, and Allie Voigt made a fastbreak layup at the buzzer to give the Rebels a 46-18 lead at the break.

USC, which made 10 of 13 free throws, met little resistance from the Knights’ defense in the first half and scored 26 of points on layups.

“A lot of it was backdoor cuts and simple things that they just didn’t defend,” said Allis, who had nine first-half points. “We saw them, we took advantage and our shots were just really on tonight.”

While the Rebels full-court pressure was giving the Knights’ guard fits, Hovendick said that defense wasn’t something they were unfamiliar with. 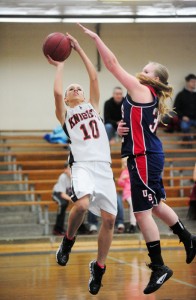 Alden-Conger’s Kendall Ward looks to shoot the ball during the second half on Friday while defended by United South Central’s Cassidy Latusek in Wells. -- Andrew Dyrdal

“We saw a lot of those things in our game last night,” she said. “It’s not like it was anything new. We just aren’t playing with confidence yet against teams that take things to us defensively.”

Hovendick said she was pleased with the way the Knights started and finished the game. The Knights were outscored by two points over the first 4:15 and outscored the Rebels 7-1 over the final 8:20, while holding it without a field goal. A-C was outscored by 43 over the rest of the game, though.

“We started off the game well, and the last couple minutes of the game we played well,” Hovendick said. “Alicia Schewe came off the bench, grabbed a rebound late, got fouled on the rebound and hit two free throws. That’s something we need to see out of everyone.”