The Best of Ed Part 3 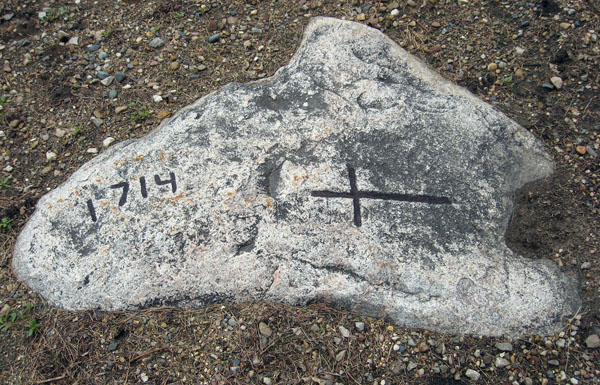 It’s somewhat hard to detect the cross and date of 1714 on the granite rock in the yard at the Dillavou farm about six miles south of Albert Lea. However, with the help of chalk the still obvious grooves in the rock can be enhanced for better viewing. Who took the time to etch the cross and date in the rock almost 300 years ago is now completely unknown. -- Ed Shannon/Albert Lea Tribune

Editor’s note: This is the third in a four-part series featuring Ed Shannon’s best Lifestyles features. The following feature was originally printed on July 19, 2009.

A granite rock in a farmyard located about six miles south of Albert Lea has the date of 1714 and a cross barely visible on its surface. This date and cross could be the oldest known evidence that Europeans visited this part of what’s now Minnesota.

About 121 years before a U.S. Army unit commanded by Lt. Col. Stephen Watts Kearney passed through what’s now Freeborn County, a group of French explorers or voyageurs may have left their mark in the area. A member of Kearney’s First U.S. Dragoons Regiment command in 1835, incidentally, was 2nd Lt. Albert Miller Lea.

The granite rock is about 3 by 4 feet in size and is almost flush with the surrounding ground. The actual size of the rock below the surface is unknown.

This rock is located at the end of a long driveway off County Road 13 (150th Street) in Freeman Township that ends in the farmyard of Earl and Pat Dillavou, rural Glenville.

The farmsite sits on the crest of a small knoll and has been in the Dillavou family since 1951. Before that, the place was owned by Arthur Anderson for few years; prior to that by Harold Johnson. And it was during Johnson’s ownership of this farm that the existence of a rock with its somewhat legible date and cross really became known.

According to a Tribune article and photo in the early 1950s, the surface of the rock was exposed in 1948 when a heavy rainstorm washed away a layer of dirt which had covered the top of the rock for a century or more.

Who carved the date and cross in 1714? Early Minnesota history indicates it may have been a Frenchman. The French had moved west from Quebec in the late 1600s to search for the elusive waterway across the continent that would lead to China. The English and American explorers came into the region much later.

The explorers from Quebec moved up the St. Lawrence River, through the Great Lakes system, and along the Mississippi, Wisconsin and Minnesota rivers.

Names like Hennepin, Marquette, Joliet, Duluth, Nicollet and Frontenac are now part of the regional map and life as a result of the French pioneers.

In fact, one group led by Pierre Charles LeSueur spent several months on the Blue Earth River near what’s now Mankato in 1700. This is emphasized with the name of Lehillier, a suburb on the south side of Mankato.

Just what group came through this area in 1714 is now completely unknown. And just why someone took the time to chisel a date and cross onto a rock has suggested four theories.

One speculation says the rock marks the grave of a Frenchman who may have died of disease or was killed by Indians. However, the lack of a name seems to discount this theory.

Another theory is based on the landmark concept. This may have been one of several rocks in the region which were marked as a route for others to follow. The cross itself is somewhat set apart from the date and does point north. Still another theory is based on establishing a claim for this part of North America as being a part of the French Empire. In fact, Prairie du Chien is Wisconsin’s second oldest city and was founded in 1673. Thus, this could logically be where the group of voyageurs traveling to the northwest through what’s now Iowa and Minnesota may have originated.

Then there’s a suggestion that the French group may have camped on the knoll near an Indian village that overlooked what was then a small lake and swampy area. The rock may have been the base for a religious service.

The late Bidney Bergie, who had visited the rock’s site several times, speculated as to the French connection to the 1714 date and the cross which can still be barely seen on the granite rock.