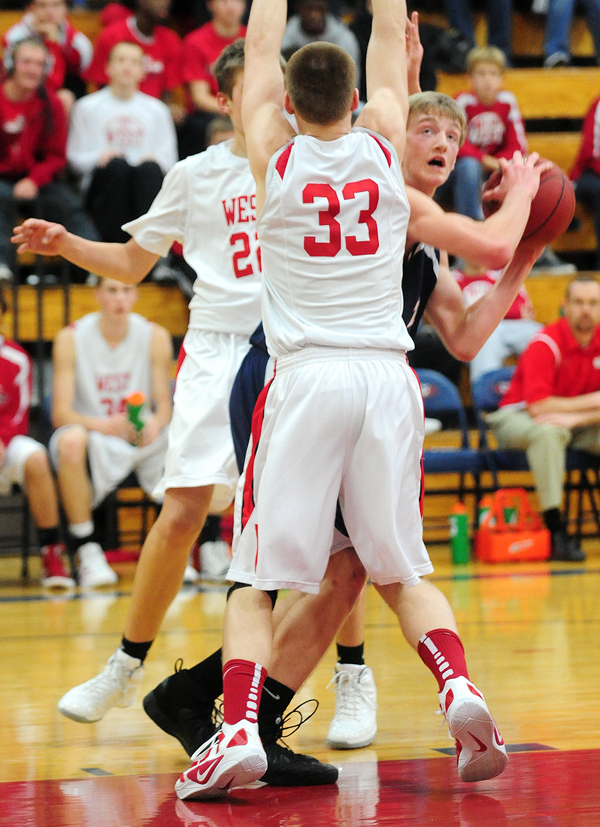 Albert Lea’s Cody Scherff looks to score against Mankato West’s Dan Wills in the first half on a 54-50 win on Tuesday. -- Andrew Dyrdal

The Albert Lea boys’ basketball team used an 8-3 run and tenacious defense to end the game on Tuesday and beat Mankato West for the first time in eight years.

The Tigers’ defense allowed its lowest point total of the season, and Albert Lea made eight of its final 10 free throw attempts to win 54-50, ending a 14-game losing streak to the Scarlets.

The Tigers’ Kyle Ooms and Cody Scherff each reached double figures in points and rebounds and recorded them when they were needed most.

With the Tigers leading 50-47 with one minute and 10 seconds remaining in the game, Scherff put back a missed layup by Ooms to give Albert Lea a two-possession lead. After Dylan See-Rockers stole the Scarlets’ inbound pass following an ensuing timeout, Ooms grabbed two offensive rebounds on the next possession and made a free throw, extending the Tigers’ lead to six after he was fouled.

The Scarlets pulled within 53-50 on a 3-pointer by Tyler Stoffel with 40 seconds left, but the Tigers’ defense held, and Ooms made a free throw with four seconds remaining to seal the win.

Ooms finished with 17 points and 12 rebounds, and the sophomore Scherff, who was eight years old when the Tigers last beat West, had 10 points and 11 rebounds.

“Scherff did a really nice job, especially on the defensive end,” Kreuscher said. “He was pretty active, and that was the first time that he’s been in at the end of the game, too. Usually we go with four guards.

“We forced some steals down the stretch, we had active hands and I was just really happy.”

The Tigers jumped out to an 11-8 lead to start the game but fell behind 15-11 after the Scarlets began scoring on backdoor lob passes.

Ooms ended the run with a steal and dunk, and the Tigers scored six unanswered points to pull ahead 17-15 with 6:10 left in the first half. The teams traded field goals over the next four minutes, but four Tigers players scored as Albert Lea closed the half on a 9-2 run to lead 29-27 at the break.

Dan Wills led the Scarlets with nine points in the first half but was held out in the second after showing symptoms of a concussion following a collision with teammate Josh Athey.

The teams were tied twice in the second half, but the Tigers didn’t give up the lead until West pulled ahead 47-46 with three minutes remaining. Tigers then finished the game on an 8-3 run.