Watching rough-legged hawks in the wind

“Everything is nearly copacetic. Life has more lumps than Ma’s gravy. I always had my nose in a book when I was a boy. We didn’t have enough handkerchiefs to go around. Jack Tupp, the mechanic, took time off from selling clueless motorists blinker fluid, to ask for my help. I’m a motivator. People have to work twice as hard when I’m around. Jack has a coin with Teddy Roosevelt on one side and Nathan Hale on the other. When he tosses that coin, he calls, ‘Ted’s or Hale’s.’ Jack needed to know how tall the flagpole in front of the Legion is. We were about to flip that coin to see who would climb the pole and measure it when Rita Book walked by and asked us what we were doing. I told her that we needed to find the height of the flagpole, but we didn’t have a ladder. Rita took a wrench from her purse, removed a few nuts from the base of the pole, and laid the flagpole down. She grabbed my tape measure and measured the pole.”

“She didn’t help. We needed to know the height of the flagpole. She gave us the length.”

Hawks in the wind

I watched a rough-legged hawk hovering in a stiff wind near a 397-foot wind turbine. The raptor was as white as winter. It extended its legs with talons at the ready and then pulled in its landing gear. I watched for 10 minutes as the hawk hovered in the December air until it finally took to the ground where it landed without prey. I once called this raptor the “Christmas hawk” because I often noticed it around that time of the year. It is called rough-legged because, like the golden eagle and the ferruginous hawk, it has feathered legs. It has black marks at the “wrist” of the wings and can be distinguished from the red-tailed hawk by the white base to the tail. The rough-legged lacks the dark leading edge to the wing that the red-tailed has. 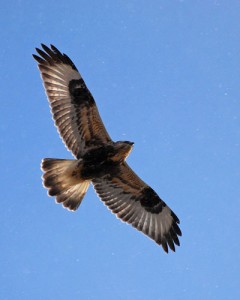 Photo of a rough-legged hawk by Darcy Sime of Alden.

I was working in Haines, Alaska. In the midst of countless bald eagles, there was a leucistic individual with a generous amount of white on the end of its wings. It was as if it were turning into the snow that surrounded it. It was lovely. Digital cameras allow photographers to reminisce immediately. I set mine aside to marvel in the moment.

I watched a crow walk on the fresh snow. The whole world was in black and white. Later in the day, as I went for a stroll, I saw crows spilling from a tree. They begin to caw, not so much at me as at the entire world. I walked and the crows talked.

Before you buy binoculars, try them out. They must fit not only your eyes, but your hands as well. They must be comfortable as eyeglasses, sunglasses, or a pair of gloves. Once you have binoculars, take them with you in your automobile and check out any large, pale, “earless” owls you see perched on fence posts, hay bales, airports or buildings near pastures or hayfields. The owls can be nearly white or have evident black barring that makes them look dirty.

Peter and the Wolf

In grammar school, one of my best days was when we listened to Peter and the Wolf on a record played on, what else, a record player. It’s a composition by Sergei Prokofiev written in 1936 and is a children’s story spoken by a narrator accompanied by an orchestra. In Disney’s animated version, the bird was named Sasha, the duck Sonia, and the cat Ivan. A flute plays the bird’s theme, an oboe plays the duck’s theme, and a clarinet plays the cat’s theme

The ferruginous hawk gets its name from the Latin indicating an iron-rust color.

I have realized that TV is not geared to me. I’m fine with that. That said, TV does have its gems. Nature, a series on PBS, is a remarkable show with incredible photography. In the past few months, I’ve watched “My Life as a Turkey,” “Jungle Eagle,” “A Murder of Crows,” and “Hummingbirds: Magic in the Air.” Each episode left me astounded.

Patrick Durkin, of Waupaca, wrote about the deer hunt in Wisconsin, “…the past five firearms seasons when hunters registered an average of 290,000 deer during our traditional nine-day hunt. Figuring 10 hours of legal shooting time daily, that’s a deer every 1.1 seconds between dawn on Day 1 and dusk on Day 9.”

Ophidiophobia is the abnormal fear of snakes.

Elaine Parker was working at McMurdo Research Station in Antarctica when an emperor penguin was seen a few miles away. Elaine went to see the bird. A snowstorm hit and visibility dropped to zero. She was trapped on the ice until the penguin led her to safety. Her book about that experience is “Harsh Continent; Blue Collar Memories of the Wild Antarctic.”

I listened to a doctor of entomology speak, of all things, on insects. She stated that bug zappers do kill insects — the wrong ones. One study found that of 14,000 insects killed by one bug zapper, only 30 were biting insects. The rest were primarily predators of those biting insects and pollinators of the plants in our gardens and fields. She added that citronella does not repel mosquitoes or ticks and that Bounce fabric softener sheets might work on fungus gnats but is ineffective in discouraging mosquitoes or ticks.

Thanks to everyone for being so kind and generous while I rang the bells for the Salvation Army and to Ed Shannon who helped us get it right.

“A happy New Year! Grant that I may bring no tear to any eye when this New Year in time shall end. Let it be said I’ve played the friend, have lived and loved and labored here, and made of it a happy year.” — Edgar Guest

“When we try to pick out anything by itself, we find it hitched to everything else in the universe” — John Muir

Al Batt lives in Hartland and is a member of the Albert Lea Audubon Society. Contact him by email at SnoEowl@aol.com.