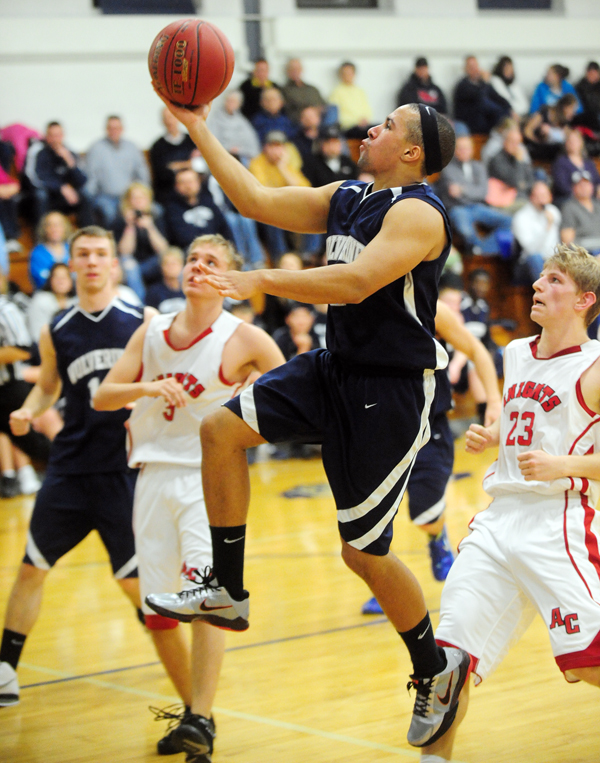 Glenville-Emmons’ Perry Kirsch drives past Alden-Conger’s Dom Ofsdahl (23) for a layup on Monday during the second half of a 66-16 win. Kirsch had five assists and three steals. -- Andrew Dyrdal

GLENVILLE — Derek Olson had 21 first-half points, and the Glenville-Emmons boys’ basketball team held Alden-Conger scoreless for 18 straight minutes on Tuesday in a 66-16 rout.

The win was the Wolverines’ seventh in eight games after starting the season 0-3, and the winless Knights matched its lowest point total of the season.

“The plan tonight was to focus and compete the whole game,” Wolverines coach Dan Fredrickson said. “We wanted to keep our focus level high defensively.”

Fredrickson said he was looking for improvements on defense after the team allowed 71 and 65 points in its last two games against Lanesboro and Lake Mills, Iowa, respectively. The Wolverines held the Knights nine points below its scoring average of 25 points per game.

“We wanted to get back to reinforcing what keeps our program rising up every year and that’s defense,” 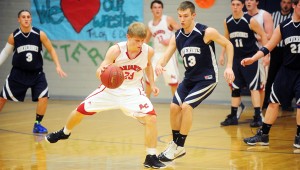 Fredrickson said. “I thought the kids did a nice job staying disciplined.”

The Knights’ (0-11, 0-6 Valley) lone senior, Kody Schoppers, who had a team-high five points, converted a three-point play 45 seconds later, and Matt Erickson made a free throw in the closing seconds to hit 16 on the scoreboard.

The Wolverines opened the game with a 19-3 lead and led 44-11 at the break after a hot-shooting first half.

Olson led Glenville-Emmons with four of the team’s five 3-pointers in the opening half and scored 14 of the team’s 16 points during a stretch late in the half. Olson scored just two points after halftime with limited playing time and finished with 23.

“He’s a very, very explosive offensive player,” Fredrickson said, of Olson, who also had three rebounds and an assist. “He’s definitely a guy we lean on. He can create his own shot, and when he gets an open 3-pointer every time he shoots I think the thing is going in.”

Trent Thoms had 12 points and 10 rebounds for the Wolverines, and Wyatt Madson had eight points and four steals.

After beginning the season with three straight losses on the road, the Wolverines only blemish over its last eight games was a 72-71 loss to Lanesboro (6-4) in overtime on Jan. 13. The Wolverines went 4-1 over the past eight days, which began with a 64-42 win over Immanuel Lutheran (1-4) on Jan. 13.

“The kids are getting more confident offensively,” Fredrickson said. “We weren’t comfortable against pressure early in the season, but being on the road against two of the top teams in our conference didn’t help either.”