Geese need to run a bit before becoming airborne

“Everything is nearly copacetic. I got Pop out of the hospital. I hooked up a DVD player for him so he could watch some John Wayne movies, but he’ll never learn how to use it. Pop isn’t good with what he calls newfangled things and he calls everything newfangled. He just doesn’t understand technology. When he pushes the garage door opener and the garage door opens, he takes it as a mere coincidence. When it comes to electronics, I have to keep the hay low where Pop can nibble at it. That’s not easy. I’ve forgotten everything I’ve ever known. What little I still know, I’ve guessed. Pop isn’t that good at guessing. Uphill Nelson stopped by to talk to Pop about the good old days. I call him Uphill because he looks as if he is walking uphill. He used to raise rabbits for some colleges in Indiana. He still has a hutch back of Notre Dame. Uphill opened the door and a squirrel slipped into the house. Uphill left a trail of peanut butter and crackers from inside the house to the outside.”

“Sort of. The squirrel ate its way out of the house. Unfortunately, it met another squirrel eating its way in.”

There were ducks and clouds on the wing. Flying geese were tugging winter away. I looked down into a channel of open water and waterfowl. The birds were all mallards. One of them was white. That is, they were all mallards except one — a Canada goose. The goose was injured and limped severely. A goose needs to run a bit before becoming airborne and the limping might have made that problematic. It settled with mallards. 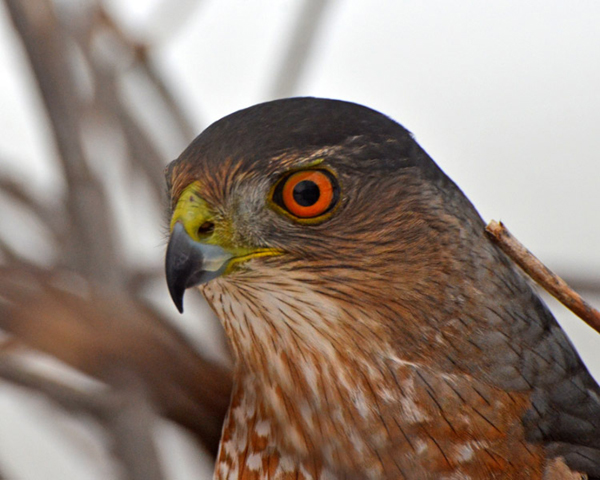 Photo of a sharp-skinned hawk by Darcy Sime, of Alden.

Shirley Gunderson, of Albert Lea, told me of seeing a bald eagle being mobbed by black-capped chickadees while it was perched in a tree. It presented a bizarre scene. The bald eagle was about 500 times the size of a chickadee. Why do birds mob raptors? Mobbing is a collective response to danger. It’s not clear whether the chickadees were trying to drive off the eagle or just calling attention to the eagle’s presence.

Staring at a starling

I stopped at the Albert Lea Tribune to visit with Tim Engstrom. I left the Tribune and got into my car in the parking lot just in time to see a sharp-shinned hawk capture a starling. The hawk held the limp body of the starling on the ground while being harassed by a crow. The crow was outraged at the hawk’s presence. I was going on a trip, so I had a packed suitcase in the backseat of my vehicle. My camera was in that suitcase. I fumbled to retrieve the camera, but before I could free it, the hawk and the crow flew away. The starling went with the hawk. I suspect the hawk carried its prey to a stump or low branch to pluck before eating.

Linda Lang, of Clarks Grove, told me that a great horned owl had hit a window of her house one night. An owl colliding with glass happens, but not often. This owl appeared to be OK. Owls fly low and hunt the roads so are frequently hit by automobiles. Sometimes owls hit a window in an attempt to take an animal that is indoors. For instance, a northern saw-whet owl trying to get a caged parakeet located just inside a window.

“Do crows mate for life?” Unless a mate dies or is incapacitated, crows seem to stay with the same mate year after year. There are exceptions. If a young pair bred unsuccessfully, they might break the pair bond. Only the female incubates the eggs.

“How many bald eagles were killed in the Exxon Valdez oil spill?” An estimated 247 bald eagles died from oil exposure in the March 1989 oil spill in Prince William Sound, Alaska. Population levels in the sound decreased by four percent the following year. The local eagle population had returned to pre-spill levels by 1995.

On Jan. 21, 140 volunteer observers counted 125 golden eagles in sixteen counties in the blufflands of Minnesota, Wisconsin and Iowa. That was more than a 50 percent increase in golden eagles over last year. The Golden Eagle Project is a partnership of the National Eagle Center and Audubon Minnesota with support from the Minnesota and Wisconsin Departments of Natural Resources and the United States Fish and Wildlife Service with funding from Minnesota’s Environment and Natural Resources Trust Fund.

The appetites of accipiters

Cooper’s hawks eat birds primarily. Small birds are safer around Cooper’s hawks than are medium-sized birds. European starlings, mourning doves, rock pigeons, robins, jays, flickers, quail, pheasants, grouse and chickens are primary prey. Cooper’s hawks rob nests and eat bats, chipmunks, mice, rabbits and squirrels. Songbirds make up 90 percent of a sharp-shinned hawk’s diet. Birds the size of robins or smaller (particularly warblers, sparrows, and thrushes) are the most frequent prey. Larger birds are at less risk, though not totally safe. Studies report quail, shorebirds, doves, swifts, woodpeckers and falcons as prey. Sharp-shinned hawks also eat mice, voles, moths and grasshoppers. Much of what they feed their babies is the nestlings and fledglings of other birds.

“The most wasted day of all is that during which we have not laughed.” — Sebastian R. N. Chamfort

“Wild beasts and birds are by right not the property merely of the people who are alive today, but the property of unknown generations, whose belongings we have no right to squander.” — Theodore Roosevelt