Memorial services for June Elizabeth Pratt, of Albert Lea, will be held at 2 p.m. Friday at the First Presbyterian Church in Albert Lea. The Rev. Dwight Netzer will officiate. Interment will be in Woodland Cemetery, Washburn, Wis., this summer. Visitation will be from 5 to 7 p.m. Thursday at Bonnerup Funeral Service, Albert Lea. 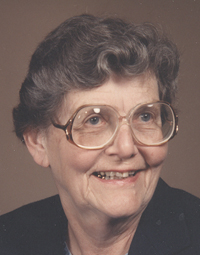 She was born on June 19, 1918, in Minneapolis, the daughter of Alfred and Mabel (Everest) Toepel. She graduated from West High School in Minneapolis, and then went on to receive her Bachelor of Science degree in education from the University of Minnesota, graduating cum laude. June was married to Marshall Sidney Pratt on Dec. 20, 1941, in Bessemer Michigan and they celebrated 60 years together. She taught home economics in the Minneapolis public school system until Marshall and June moved and made Albert Lea their home in 1946. She and Marsh were the owners of Zetterholm Motors and she also taught school in the Albert Lea public school system. She was a member of the First Presbyterian Church where she was active in the women’s circle and choir. She was also a member of the Alpha Chi Omega, Phi Upsilon Omicron and Omicron Nu Sororities and an honorary member of Home Economics Sororities. She had also been active in D.A.R., A.A.U.W., the V.F.W. Auxiliary and the South Broadway Homemakers. June also taught Continuing Education sewing classes for many years and made a mean blazer.

Grandma June enjoyed sewing, quilting, crafting, baking and spending time with her family. She was known for making lovely gifts for her family and friends. She loved spending time with Marsh, family and friends at the cabin in Washburn. Enjoyment there was found picking berries, swimming, general relaxation and taking the ferry to visit her childhood summer home on Madeline Island.