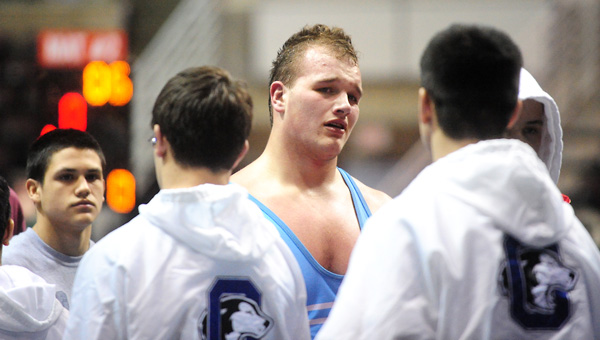 It was an emotional ride as the dual between the Albert Lea Tigers and the Owatonna Huskies came down to the heavyweight match. Bryce DeBoer held Spencer Sorenson off until 5:48 when he was pinned. Brandi Hagen/Albert Lea Tribune

ROCHESTER – For the first time in 18 years, neither Albert Lea nor Owatonna will be wrestling in the state team tournament.

Owatonna tallied three straight falls against the Tigers on Saturday in the Section 1AAA semifinals and erased an 11-point deficit to win 33-26 at the Rochester Civic Center. Owatonna then lost 39-27 to section newcomer Hastings in the finals, marking the first time since 1994 the Big Nine Conference rivals were shut out of state.

The Huskies led Albert Lea 27-26 heading into the heavyweight match between seventh-ranked Spencer Sorenson and the Tigers’ Bryce DeBoer. Owatonna’s ninth-grader built a 10-2 lead entering the third period, but two takedowns and a reverse pulled DeBoer within 13-8. With time running out on Albert Lea in the winner-take-all match, Sorenson pinned DeBoer with one second remaining.

“Obviously I’m pretty excited about it,” Huskies coach Cliff Casteel said after the match. “Albert Lea is just an awesome program. They’re always prepared, so for us to come out with a win like that, I’ve got to hand it to our kids.”

Albert Lea sped out to an 8-0 lead after major decisions from No. 1-ranked Trevor Westerlund and No. 5 Garrett Wangsness, but didn’t score bonus points again until No. 2 Trey Hable won by fall at 170 pounds.

Meanwhile, the Huskies won seven of the final 12 matches to even the final wins count at seven, but scored bonus points in five for the ultimate edge.

“Bonus points were huge,” Tigers coach Larry Goodnature said. “We didn’t match up well with them, and they wrestled a little better than we did today.”

Evan Green put the Huskies on the scoreboard at 120 pounds, edging Dakota Wangsness 4-3, before each team won two of the following four matches. The Huskies’ Bowen Schultz earned a technical foul over Dereck Samudio, but had the Tiger on his back for most of the match, and Ben Anderson followed with a major decision over Albert Lea’s Devin Nelson to tie the dual at 11 heading into 145 pounds.

Brody Sundbland and Tristan Westerlund each recorded decisions, and the Tigers looked to pad its lead when Bany Chan at 160 pounds faced an overmatched ninth-grader, Kylie Kath, who was 15-21 entering Saturday. Chan led 5-4 to start the final period, but a reverse with 35 seconds left gave Kath a 6-5 lead, which he held onto until time expired and cut the Tigers’ lead down to two.

“That was a key match,” Goodnature said. “But you’ve got to give Owatonna credit. They put together a good match, and all those kids wrestled well.”

Hable pinned winless Kaden Cloud in 3:32, and No. 3 Dalton Westerlund clipped fourth-ranked Jordan Zeman 3-1 at 182 pounds to give Albert Lea its largest lead of the dual at 26-15.

But the lead evaporated quickly.

The Huskies’ Justin Flores pinned Dustin Samudio in 1:49, and third-ranked Coyte Kuefner pinned Jace Talamantes in 34 seconds, giving Owatonna a one-point lead and setting up a dramatic showdown at heavyweight for a spot in the finals.

DeBoer, who lifted his arms before the match to get Tigers fans off their feet, had more size and strength than Sorenson, but the ninth-grader, who pinned DeBoer in their first meeting, had more skill and built an insurmountable lead before a dramatic pin in the closing second.

Casteel complimented Albert Lea’s coaching staff, and said the key was limiting bonus points for the Tigers, which notched nine pins in a section-opening win over Northfield, the coach’s former team.

“In my mind, the best coaching staff in the state has been Albert Lea’s over the past 15 years,” Casteel said. “We did exactly what we needed to as far as staying off our backs and getting bonus points when we needed them.”

The loss was the Tigers’ first in four meetings with the Huskies over the past two seasons and only the second time in the last seven years the team hasn’t qualified for state.

Goodnature said his team would put Saturday’s loss behind them and begin focusing on the Section 1AAA Individual Tournament, which will be held Friday and Saturday at the Civic Center.

“Everybody left everything on the mat, and as coaches, that’s all we can ask for,” he said. “We got beat, and now we have to forget about the team portion of the tournament and focus on next weekend.”