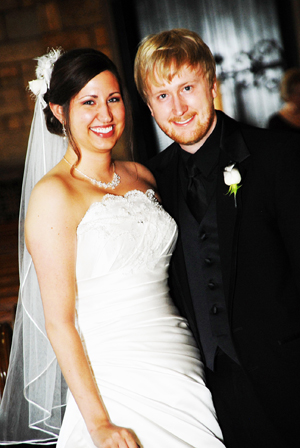 Parents of the bride are Jeff and LouAnn Bullis, of Apple Valley. Grandparents are Ralph and Mary Carlson and Wally and Delores Bullis.

Parents of the groom are Dawn Freeman and Ron Freeman, both of Albert Lea.

Grandparents are Don and Donna Fitzler and Jim Freeman, all of Mitchell, S.D.

Matron of honor was Jamie Bullis, sister-in-law of the bride, of Shakopee.

Flower girl was Cailyn Henslin, friend of the couple, of Brookings, S.D.

Ushers were Parker Blow, friend of the couple, of Sioux Falls, S.D.

Receiving line was at the Tropics Trail, Minnesota Zoo, Apple Valley, followed by a dinner and dance in Discovery Bay.

Personal attendants were Stephanie Henslin and Michaela Reed, both friends of the couple, Brookings, S.D.

Emily graduated in 2006 from Eastview High School, Apple Valley, and attended South Dakota State University and is pursuing a degree in veterinary medicine. She is department manager at Walmart, Brookings, S.D.

Tyler graduated from Albert Lea High School in 2003 and is a 2008 graduate of South Dakota State University, Brookings, S.D. He is employed at Daktronics, Brookings, S.D., as a thermal design engineer.

A wedding trip was taken to Las Vegas the day after the wedding.