Following an owl around Manly, Iowa

“Everything is nearly copacetic. My sister Cruella is on my case. She says that I never vacuum the floors in my house. It’s not my fault. It’s my nature to abhor a vacuum. To be honest, I mean to do it, but I forget. I often have amnesia and déjà vu at the same time. That’s when I think I’ve forgotten something before. I ordered some snazzy wingtip shoes by mail. My friendly rural mail carrier delivered them to me. I’ll bet he had to stop and ask directions. His car is so old, it remembers when gas was 25 cents a gallon. But his jalopy is paid for. That’s a rare thing. If you don’t owe money on your car then you’re either wealthy or you’re walking to work. The shoes came with a five-day free trial. If I didn’t like the shoes, I could return them on the sixth day and there would be no charge. Now the crooks are billing me for the shoes and threatening to add a late charge.”

“Did you return them after five days?” I say.

“Because the offer said that if I didn’t like the shoes, I could return them.”

“I liked the shoes.” 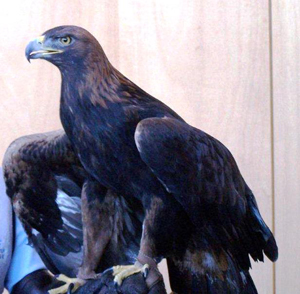 Photo of a golden eagle by Al Batt.

A river of birds flowed along with me as I drove down a rural road. The river was a flock of mixed blackbirds traveling an untroubled sky. I have never texted while driving nor have I ever looked through binoculars while driving. Therefore, I can only guess that the twisting group of birds consisted of various blackbird species, grackles, cowbirds and starlings. Birds that share feeding habits often flock together.

It was owly in Manly

Some years ago, a northern hawk owl was visiting Manly, Iowa. Manly isn’t far from the city of Fertile. It is difficult to visit either place without the cartoon bubble over my head being filled with a newspaper headline reading, “Manly man marries Fertile woman.” That aside, Manly is far south of a northern hawk owl’s typical range. This owl of the boreal forests being in Manly was as unlikely as Charlie Sheen marrying Paris Hilton at a Lutheran Church in Manly. The owl was being seen near the library. I wanted to see the owl in both the worst way and in the best way. I made plans to see the owl at my earliest convenience, which proved not to be convenient for me. If I’d have had the time, I’d have been too busy. I did make it to Manly, and the owl was kind enough to wait for me. I saw it not only near the public library but perched upon the library sign. It was looking for lunch. The Cornell Lab of Ornithology says that a northern hawk owl can detect a vole up to 1/2-mile away. The owl is diurnal and it doesn’t really hoot, but it was difficult not to imagine that the owl was hanging around the library because it enjoyed hoot-dunits.

There are more than 250,000 species of moths and butterflies. For every butterfly you see in your yard, there are about 19 species of moths there at night. Caterpillars are everywhere. They eat more leaves than any other group of organisms in the world. Dan Janzen is a professor of biology at the University of Pennsylvania who studies caterpillars in the Costa Rican rainforest. He said, “Caterpillars are food for almost every carnivore. That means birds, mammals, spiders, beetles. Everybody eats caterpillars. So it’s a sort of hamburger in the world.”

“How can I get rid of buckthorn?” Buckthorn typically has a tiny thorn at the tip of its branches. Cut the trunk an inch above ground and treat the surface of the stump and bark edges with an herbicide containing Triclopyr. Bag or burn the cut brush to minimize spread of the plants. Buckthorn is hardy and persistent.

“Where and how do robins survive the winter here?” Some scientists studying the robins that don’t migrate are finding that they don’t breed much with migratory robins. The scientists speculate there may be genetic differences. The robins that remain here in winter tend to travel in large flocks and reside in wooded areas and ravines offering a source of open water. I often see them in riparian areas. The robins feed on fruit such as buckthorn berries, cherries, crabapples, mountain ash berries, etc. People report robins making rare visits to suet feeders.

Baton Rouge owes its name to the French explorer Sieur d’Iberville, who while leading an exploration party up the Mississippi River saw a reddish cypress pole festooned with bloody animals that marked the boundary between the Houma and Bayou Goula tribal hunting grounds. They called the pole and its location le baton rouge or the red stick.

The right whale is the size of a school bus. They are called “right whales” because whalers believed the whales were just the “right” ones to hunt, as the whales floated when killed and often swam within sight of shore. They were also incredibly tame and swam near boats. They were hunted to near extinction during the busiest years of the whaling industry.

The Norse god Odin had a pair of ravens. They were named Huginn and Muninn — Huginn is thought and Muninn is memory. Odin sent ravens off around the world at daybreak, to bring him the daily news.

“In ordinary life we hardly realize that we receive a great deal more than we give, and that it is only with gratitude that life becomes rich.” — Dietrich Bonhoeffer

“Anyone who has accustomed himself to regard the life of any living creature as worthless is in danger of arriving also at the idea of worthless human lives.” — Albert Schweitzer