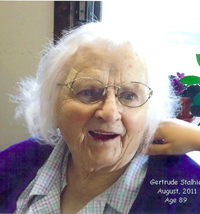 Gertrude Marie Stalhiem was born on Aug. 16, 1922, in Pickeral Lake Township, rural Conger, the daughter of August and Rickia (Behr) Lembke. She was baptized on Sept. 19, 1922, by the Rev. H.F. Pfieffer at Concordia Pickeral Lake Lutheran Church and was confirmed there on Dec. 20, 1936, by the Rev. H.H. Dohmeier. Gertrude was married on June 20, 1940, to Kenton A. Stalhiem at Concordia Pickeral Lake Lutheran Church in rural Albert Lea by the Rev. H.H. Dohmeier. Together she and Kenton lived on a dairy farm at rural Lake Mills, Iowa, and later moved to a farm near Twin Lakes and raised four children: Donna, Kenton Jr., David and Nancy. On Oct. 5, 1956, they moved their family to rural Amery where she was a farm wife for 39 years. She was a member of Grace Lutheran Church of Clear Lake, Wis. Gertrude was well known for her writing ability and her letters were enjoyed by the elderly, shut ins, relatives and pen pals. She was involved with the family’s Clydesdale horses at fairs and shows. In her spare time, Gertrude enjoyed crocheting, reading, traveling, baking cookies and spending time with her family, grandchildren, and great-grandchildren.

She is preceded in death by her husband, Kenton; parents: August and Rickia Lembke; brothers: August, Frank and Alfred; sisters: Marie, Minnie, Viola and Beatrice.