Identifying birds is just one part of studying them

“Everything is nearly copacetic. I like spring, but I’ll miss ice fishing. I love to ice fish because it allows me to work at home. I’m not white trash. I’m Caucasian debris and I can prove it. I’ve been notified that I have a scholarship to Harvard Medical School.”

“It’s true. Of course, they don’t want me while I’m still alive. I put on 10 pounds over the holidays. I always eat too much on Presidents Day. For me, dieting is like waving a blue flag in front of a bull. Nothing happens. I went to an exercise class. I thought the place was overrun with mice with all the squeaking I heard. It turned out to be the sound of creaky knees. Ma put a photo of a beautiful, scantily clad, young woman on the door of the refrigerator. I asked her why the picture was there. She told me that she had put it up to remind herself not to overeat.”

“Not good. Was the pastor angry?” I say.

“No, he wasn’t. My snoring kept the rest of the congregation awake.”

Looking at birds is no chore 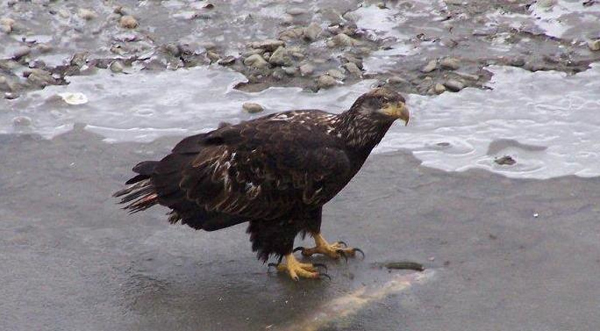 Photo of a young bald eagle by Al Batt.

I was picking up dead sticks in my yard and tossing them into piles. It’s a chore common to spring weather. Winter’s winds prune trees. An ebullient robin sang a repetitive tune full of hope and promise. A song inspired by day length. In the midst of dead things, life sang. I listened to the gossip of newly arrived red-winged blackbirds. It was full of travel talk and winter tales. I found their talk intriguing enough to make a visit to a local lake. Minnesotans love lakes. That’s why we have so many of them. Henry David Thoreau wrote, “A lake is the landscape’s most beautiful and expressive feature. It is earth’s eye; looking into which the beholder measures the depth of his own nature.”

Killdeer, common grackles and American kestrels provided company on my journey. I saw large numbers of Canada geese, many standing in pairs on ice or mud. I stopped to see eagles at the lake. They were fishing. They were all bald eagles — adults with white heads and mottled immature birds. Young golden eagles often have white patches under the wing and on the tail, but their white is more clearly defined than the white mottling on the wings and body of a young bald eagle. Spring rose up on eagles’ wings. I watch birds not only to marvel, but also to learn. Anna Botsford Comstock, the first woman professor at Cornell University and a pioneer in nature study, said, “The reason for studying any bird is to ascertain what it does. To hear some of our bird devotees talk, one would think that to be able to identify a bird is all of bird study. On the contrary, the identification of birds is simply the alphabet to the real study, the alphabet by means of which we may spell out the life habits of the bird.”

“What do pileated woodpeckers eat?” Primarily carpenter ants and wood-boring beetle larvae. They also feed on fruit, nuts and suet.

“When do white-tailed deer have babies?” Fawn drop is mostly in May and June, but occurs from April into August.

“When do deer lose their antlers?” They shed from late December into April.

About 50 percent of fledged robins die each year. If a hatch-year robin makes it to mid-winter, it will live an average of 1.7 years.

According to the National Audubon Society, common grackle numbers have shrunk by 60 percent in the last 40 years.

The U.S. Fish and Wildlife Service issues depredation orders allowing the killing of migratory birds such as crows, grackles and red-winged blackbirds damaging property or posing a health hazard. New regulations removed the rusty blackbird, a species in serious decline, from the list of birds considered under such orders. It also banned the use of lead shot to kill birds under a depredation order because lead’s toxicity might poison other animals.

A woodpecker has a zygodactyl foot. The first and fourth digits face backward while the second and third toes face forward. This type of foot is excellent for clinging to the trunks of trees.

This from “Kin and Kind” by Jonah Lehrer in the March 5, 2012, issue of The New Yorker, “Although the vampire bat has traditionally been seen as a ghoulish predator, it interests biologists for another reason: it is deeply altruistic. The bats live in expansive colonies, with hundreds or thousands sharing the same dark cave. Bats must feed constantly — they starve to death within 60 hours — and this has led to the evolution of an unusual way of sharing food. If a vampire bat fails to find a victim during the night, it will begin licking under the wings and on the lips of a chosen colony member. The animals then lock mouths, and the successful hunter starts vomiting warm blood. If such sharing did not take place, scientists estimate that more than 80 percent of adult vampire bats would die of starvation every year.”

The Bluebird Recovery Program Expo will be April 14 at Byron Middle School. It will feature Minnesota Raptor Center birds, Tom Comfort speaking on the key factors in bluebird nest box locations, Keith Radel on fledgling rate improvement and safety, Mike Jersek on buffalo gnat control on baby bluebirds, Kelly Applegate on purple martins, Roger Strand on wood ducks, and heaps of hot air from this hick from Hartland. There will be vendors, food and friends. Find more information at http://bbrp.org, 507-332-7003, or jmmclm@localnet.com.

When Mother Teresa accepted her Nobel Prize, she was asked, “What can we do to promote world peace?” She replied, “Go home and love your family.”

“Go to the ant, thou sluggard; consider her ways and be wise.” — King Solomon in Proverbs