Jorgen M. (Jiggs) Silrum, 93, died on Sunday evening, March 18, 2012, at St. John’s Lutheran Home, Albert Lea. Funeral services will be at 11 a.m. Saturday at Bethany Lutheran Church, rural Frost. Visitation will be at Bruss-Heitner Funeral Home in Bricelyn from 5 to 7 p.m. Friday and one hour before the service at the church. The Rev. Arne Halbakken will officiate and interment will be at the Bethany Lutheran Cemetery. Bruss-Heitner Funeral Home in Bricelyn is in charge of arrangements. 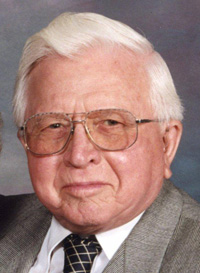 Jorgen was born on Jan. 6, 1919, to Ole T. and Elizabeth (Gronfor) Silrum near Bricelyn. Jorgen was baptized and confirmed at Bethany Lutheran Church, where he was Sunday school superintendent for 25 years and remained an active member throughout his life. He graduated from Bricelyn High School in 1937 and attended Lutheran Bible Institute in Minneapolis. He was united in marriage to Myrtle Asmus on June 24, 1941, at the Bethany parsonage. During the war, the couple lived in Long Beach, Calif., where Jorgen worked in the naval ship yards. Following the war, Jorgen and Myrtle returned to Bricelyn where they raised their daughter, Carol Ann. After the passing of Myrtle in 1970, Jorgen married Ruth (Gangeness) Skare on Aug. 9, 1983.

Jorgen owned and operated Silrum Service Station in Bricelyn for nearly 40 years and was president of the Community Club. After retirement, Jorgen volunteered for Faribault County Area Hospice for 13 years and was honored as Outstanding Senior Volunteer for Region 9 in 2002.

He was preceded in death by his parents; wives: Myrtle and Ruth; sisters: Alma Holmseth and Dena Erdahl; brothers: Rueben, Thilmer and Edwin Silrum; brothers-in-law and sisters-in-law.

Jorgen was grateful for many lifelong friendships in his Bricelyn and Bethany communities and more recently his friends at Knutson Place and caregivers at St. John’s Lutheran Home and Mayo Clinic Health System in Albert Lea.