Martha Irene (Lyngaas) Rasmussen was born on March 11, 1920, to Emma Bertina (Jacobson) and Ingvald Otto Lyngaas. She grew up on a farm near Twin Lakes with six sisters and one brother. Martha was baptized and confirmed at Lunder Lutheran Church and attended country school with her sisters and brother. 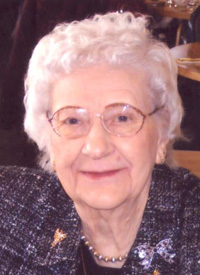 Martha married John E. Rasmussen on Oct. 27, 1949. They have four children: Eugene, Donald, Gordon and Cindy. Martha was a homemaker and provided a loving home for her husband, children and extended family. She was a wonderful cook and everyone enjoyed her many homemade baked goods!

Martha was always very committed to family. She graciously welcomed family and friends into our home and was responsible for many gatherings for lunch, dinner, and afternoon coffee and sweets. She had a positive attitude and a delightful sense of humor, which she shared with all. Martha – mom, granny, grandma, sister, auntie and friend – will be deeply missed. XO!

Funeral services will be held at 10:30 a.m. Saturday at the East Freeborn Lutheran Church of Albert Lea. The Rev. Matthew Griggs will officiate. Friends may greet the family Friday evening from 5 to 7 p.m. at Bonnerup Funeral Service in Albert Lea, as well as one hour prior to the service at the church. Interment will be in the Lunder Lutheran Cemetery, rural Albert Lea.

Special thanks to the staff at St. John’s Lutheran Home and the Crossroads Community Hospice for their care and concern.