“Everything is nearly copacetic. I used some mouthwash that kills germs dead. Now I have a mouthful of dead germs. I’m not sure how I should feel about that. My brother Crawford and I took Ma and Pop to a movie. We took them to a scary show. They enjoy horror films because they love each shudder. They both continue to suffer from good health. Crawford is a machinist. Whenever there is work to do, he makes a bolt for the door. He has a unibrow so thick, he keeps his car keys in it. Crawford is a real health nut. He takes a bath in the spring.” 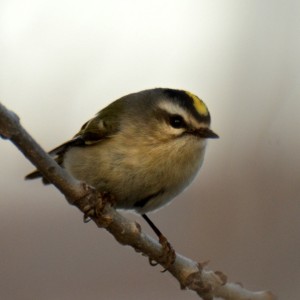 Each of the golden-crowned kinglet's nostrils is covered by a single feather. Photo by by Darcy Sime of Alden

“In a natural spring?” I inquire.

“I guess. It comes every March. I’ll never forget that day when Crawford and I both got 100 in spelling. I got a 60 and he got a 40. Ma put those papers in the family scrapbook featuring academic highlights. Sheriff Hank Uft pulled me over for speeding yesterday. I told him that 60 mph is the new 30, but he didn’t believe me. He let me go with a warning.”

“Not that nice. He warned that the next time he catches me speeding, he’ll give me another ticket.”

The cat looked out the window with awe like the one I possessed the first time I saw Harmon Killebrew play ball in person.

The cat’s tail didn’t whip about furiously as it did when she spotted another cat. Her mouth opened in an attempt at meowing, but no sound was produced. I noticed she was looking up slightly.

I peered from the corner of another window, trying not to frighten the visitor — whatever it was.

It was a crow that had landed in a tree near the house.

The cat found the crow amazing. So did I.

At least he didn’t have two guns

The Iowa Department of Natural Resources reported that a man from Redfield accidentally shot himself while trying to kill a raccoon. Larry Godwin had a raccoon in a live trap and fired his .22 caliber pistol at the raccoon. The ricocheting bullet struck Larry in the lower abdomen. Larry dropped the handgun, which fired and shot him in the same region. He was treated at Des Moines Mercy General. There was no report as to the condition of the raccoon.

“Are there clothes moths?” We have two species — the webbing clothes moth and the casemaking clothes moth. The most common small moths seen indoors are Indian meal moths that are associated with stored foods — cereals, grains, pasta, birdseed, pet food, etc. A man told me that he found one source to be an old granola bar in the pocket of an unused coat. An Indian meal moth is darker on half its body. Clothes moths are uniformly yellowish or buff in color and approximately 1/4-inch long. They have a fluttery flight and tend to avoid light. The clothes moth lays its soft, white eggs in fabric. The larval phase is the only feeding stage in the moth’s life. Fully-grown larvae are 1/2-inch long and white with brownish-black heads. They spin a silken feeding tube or hard protective case in the fabrics on which they feed. Most clothes moth in homes arrived in carpeting, woolen goods, furniture and other home furnishings. They feed on wool, fur, feathers, hair and other materials of animal origin. They don’t nosh on plant material, like cotton, and generally do not attack synthetic material unless it’s blended with wool.

Aldin Grahn of Albert Lea writes, “Do you know if that golden eagle that you mentioned in your column is trackable on the computer, such as the eagle from Decorah?” Periodic updates are at http://mn.audubon.org/golden-eagle-45.

“Do you know where I could get plans to make a squirrel house out of a tire?” Plans are here: http://msucares.com/pubs/publications/p0884.htm or at http://www.ehow.com/how_4442558_build-squirrel-house.html. Houses are available commercially.

A survey conducted by the University of Minnesota and the Smithsonian Migratory Bird Center in Chippewa National Forest and Chequamegon-Nicolet National Forest found a direct link between invasive European earthworms and reduced numbers of ovenbirds in sugar maple and basswood forests. Earthworms consume the rich layer of leaf litter on the forest floor. Herbaceous plants that thrive in leaf litter and provide cover for ground-nesting birds are reduced. As a result, ovenbird nests become visible and vulnerable to predators and there are fewer insects for the birds to eat.

The Bluebird Recovery Program Expo will be held April 14 at Byron Middle School. It will feature the Minnesota Raptor Center, Tom Comfort speaking on the key factors in bluebird nestbox locations, Keith Radel talking on fledgling rate improvement and safety, Mike Jersek on buffalo gnat control on baby bluebirds, Kelly Applegate on purple martins, Roger Strand on wood ducks, and hot air from this hick from Hartland. Call 507-332-7003 or email jmmclm@localnet.com for information. A registration form found at http://bbrp.org/wp-content/uploads/sites/14/2011/12/Expo-Printable-form1.pdf.

“To forgive is the highest, most beautiful form of love. In return, you will receive untold peace and happiness.” — Robert Muller