The funeral service for Stanley V. Vorba of Albert Lea will be held at 2: p.m. Saturday at Trinity Lutheran Church, Albert Lea. The Rev. Curtis Zieske will officiate. Interment will be in Hillcrest Cemetery. Military honors will be accorded by Albert Lea veterans organizations. Visitation will be from 5 to 7 p.m. Friday at Bonnerup Funeral Service, Albert Lea, and one hour before the service at the church. 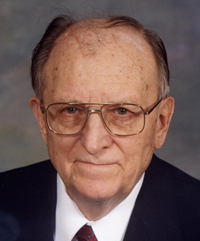 Stan died on Wednesday, March 28, 2012, at Thorne Crest Retirement Community where he had resided for the past year. He was 90 years old.

He was born on July 29, 1921, near Gladbrook, Iowa, the son of Albert and Libby (Konicek) Vorba. Stan attended grade school in Vining, Iowa, and then graduated from Clutier High School in 1939. Stan was drafted into the United States Army in 1942, and transferred to the Air Force for pilots training in 1943. During WWII he served as an Air Force pilot in France and England, hauling troops and supplies. After Victory in Europe Day, he was stationed in Brazil for six months receiving his honorable discharge in March of 1946. He retired as major from the Airforce Reserve in 1977. When Stan returned from active duty in 1946, he attended Gates Business College in Waterloo, Iowa.

Stan married Mary Lou Tucker and to this union daughter Pamela was born. They were later divorced.

Stan began his working career as office manager for Gamble Robinson in Waterloo, he was later transferred to Austin. It was in Austin that he met Lois Amundson, and they were married at Trinity Lutheran Church in Hayfield on July 14, 1957. On Jan. 16, 1956, he began working for the accounting department at Wilson & Co. in Albert Lea from which he retired on Feb. 28, 1984. Stan and Lois had lived in Austin until 1959, when they made Albert Lea their home. It was here daughter Sara was born.

He was a member of the American Legion, the Retired Officers Association, Trinity Lutheran Church and was a charter member and past president and secretary of the Kiwanis Golden K II Club in Albert Lea.

Stan was a very devoted man to his country, his work and his family, serving as caretaker for his wife Lois until she died in 1997.

Stan is survived by two daughters: Sara and her husband, Larry Gerlach, of Austin, and Pamela and her husband Robert Bechill of Lodi, Calif; two grandsons: Daniel and Bradley Gerlach of Austin; brother Marvin Vorba and his wife, Nadine of Tulsa, Okla.; sister-in-law, Marjorie Tvedt of Rochester; and two nieces and two nephews.

He was preceded in death by his parents; his wife Lois; sister Verna Mae and her husband Marvin Hartwig; niece, Wendy (Hartwig) Zumalt; and brothers-in-law: Everett Tvedt and John Amundson.