Ward, district populations are out

It is unlikely Freeborn County or Albert Lea will see any redistricting this spring as a result of population changes in the 2010 Census.

Freeborn County Auditor-Treasurer Dennis Distad said the populations of all of the county districts and city wards are within the state guidelines. 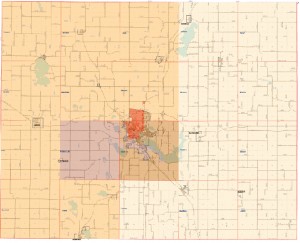 A map of the commissioner districts in Freeborn County.

The guidelines suggest all district populations to be within 10 percent of the average population of all the districts within a county. The same applies to wards within a city.

“It is my opinion and my recommendation to the board that the boundaries are within state range guidelines and that we do not need to redistrict any commissioner boundary lines,” Distad said.

The decision to redraw the county or city voting boundaries, however, is up to the Freeborn County Board of Commissioners and Albert Lea City Council.

The populations are within the guidelines, but the issue remains whether the present set of city and county leaders deem them to be fairly drawn.

The city wards and county commissioner districts have been in place since the early 1990s.

According to numbers provided by Distad, there are an average of 6,251 residents in each of the five commissioner districts within Freeborn County. 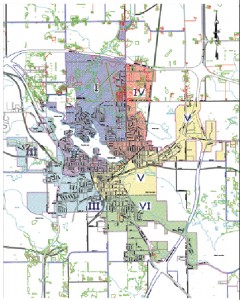 A map of the wards in the city of Albert Lea.

— Numbers updated after the 2010 Census