2012 Teacher of the Year named 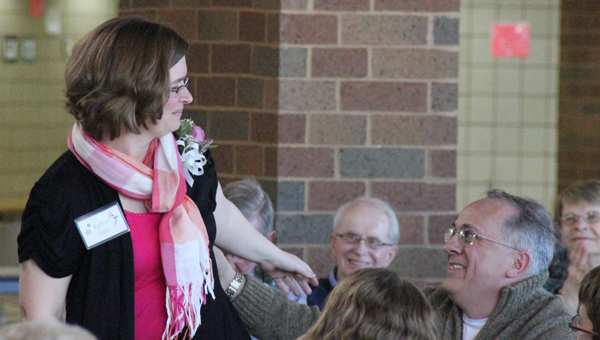 Albert Lea’s Teacher of the Year was named during a ceremony Wednesday afternoon.

Kathie Lein, a special education teacher at Halverson Elementary School, won the honor. She said she was overwhelmed after learning she was chosen. 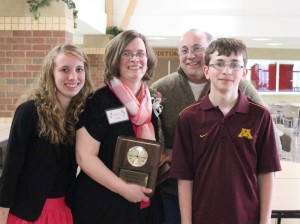 Kathie Lein poses with her husband Ross, son, Herbie, and one of her daughters, Carol.

“My students will be excited,” Lein said.

After she was chosen she gave a quick speech saying that she was honored and thankful for the award.

“I’ve wanted to be a teacher as long as I can remember,” Lein said.

Her husband, Ross, and two of her three children, Carol and Herbie, were at the reception that was held at Albert Lea High School. Her daughter Mina was unable to attend. Halverson Principal Matt Esterby said Lein has compassion for her students and that she deserves the award.

“When she gets in the room she just comes alive,” Esterby said.

The other four finalists were Wendy Greenfield, Nichole Brownlee, Kristen Seeger and Jo Ann Erickson. Each had the opportunity to introduce their families and friends to the crowd before the award was given. 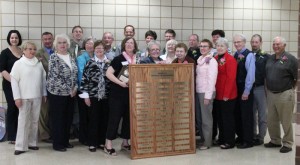 Many of the past Teachers of the Year were present Wednesday and posed for a photo with the new plaque bearing their names that will be hung in the board room at Brookside Education Center.

Special this year was the attendance of many of the last 30 teachers of the year. To memorialize the award’s recipients the district made a plaque with all the names of teachers chosen since the award’s inception in 1982. The plaque will be put in the board room at Brookside Education Center.

The 2011 Teacher of the Year Peggy Bennett also spoke at the reception and said one of the main jobs of a teacher is to be a coach and not let children give up hope.

“It’s such an important thing to teach our kids,” Bennett said.

“Education has evolved considerably in the last 30 years,” Funk said. “A lot has changed but the one thing that has not changed is excellent teaching.”

Lein is a graduate from Albert Lea Area Schools and said it is a wonderful feeling to be back in the district and nominated for Teacher of the Year. She’s been a nominee before, and was a finalist three other times before this year.

The symphony orchestra, made up of Albert Lea High School students, performed at the Teacher of the Year ceremony Wednesday afternoon.

Lein first taught special education for the Alden-Conger School District and has been at Halverson for 19 years. She said she loves the staff and students she works with and likes the unique opportunity of working with and watching students grow throughout their seven years in the elementary school.

She said she’s continually surprised by her students and that it’s “amazing what some of my students have to deal with and overcome on a daily basis just to do things that many of us take for granted like sitting down and reading a book.”

She received her master’s degree from Saint Mary’s University. Lein has been involved in different committees in the district over the years and is currently a part of the citizenship committee and Halverson child study team. She’s also a teacher representative with the Halverson parent-teacher organization.