Funeral services for H. Ellsworth Tukua, 95, of Albert Lea, will be at 2 p.m. Thursdayat Cross of Glory Lutheran Church. The Rev. Dennis Frank will officiate. Interment will be at Hartland Cemetery. Visitation will be from 4 to 7 p.m. Wednesday at Bayview/Freeborn Funeral Home and one hour prior to the service at the church. To sign the guest book, go to www.bayviewfuneral.com 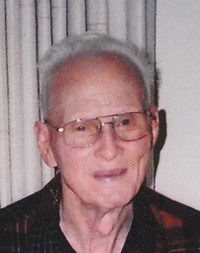 H. Ellsworth Tukua was born on Oct. 14, 1916, to Erick and Emma (Madson) Tukua in Hartland Township. He grew up on his parents’ farm in Hartland Township and attended rural school District No. 10. In 1935, he joined the Civilian Conservation Corps and worked with the U.S. Forest Service in the Superior National Forest in northern Minnesota. In 1938 Ellsworth began working for a construction contractor operating heavy equipment. On July 20, 1940, Ellsworth was united in marriage to Janet Marlin at the Little Brown Church in the Vale in Nashua, Iowa. In 1947, Ellsworth and his brother, Eugene, formed a partnership as Tukua Brothers Construction, and in 1958, Ellsworth and Janet became full owners, changing the company name to Tukua Drainage Construction, which he continued to operate until his retirement at age 75. Ellsworth’s reputation was that of a perfectionist, a trait that his customers most appreciated. Ellsworth and Janet spent their married life living in Hartland where they raised four children. They were members of Cross of Glory Lutheran Church, and Ellsworth served as treasurer and also mayor of Hartland for several years. Ellsworth was hard working yet always willing to lend a helping hand. He loved hunting, fishing, playing cards, family gatherings and traveling around the country. He was a devoted husband and father and will be dearly missed by his family and friends. Memories of him, his wonderful sense of humor and hearty laugh will be forever cherished.