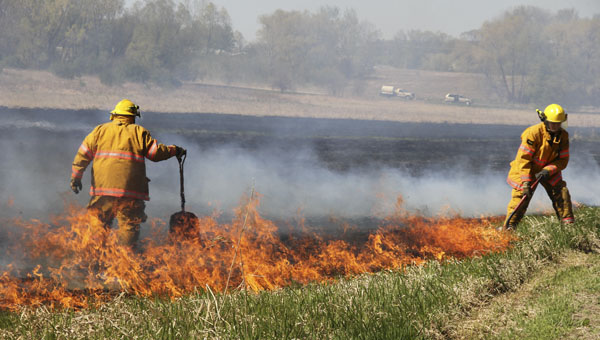 Manchester firefighters do their best to smother a grass fire south of Oregon Street on Monday while other firefighters work to bring hoses to the blaze. -- Tim Engstrom/Albert Lea Tribune

Firefighters from the Albert Lea area on Monday battled a 19-acre grass fire on the south end of Albert Lea, ultimately keeping it from burning homes.

The blaze started at about 10:30 a.m. in the field south of Oregon and West Seventh streets, east of Lincoln Avenue and north of West Ninth Street, as wind gusts blew in from the west threatening a stand of trees behind several houses along South Broadway Avenue. The fire grew as the wind periodically changed directions, blowing from the south and threatening homes on Oregon Street.

“If it gets any higher, I’m packing all my stuff up,” said Paula Griffin of 1302 Madison Ave. during one particularly strong gust from the south.

The wind speed Monday morning was about 15 mph with 23 mph gusts.

Officials knocked on the doors of nearby homes, and residents on South Broadway were also warned of the blaze.

The KATE-AM radio tower at one point was also surrounded by fire. KATE Radio General Manager Bob Mithuen said the tower was damaged but the station never went off the air. He was inspecting it to see the extent of the damage Monday afternoon.

The cause of the blaze has not yet been explained, but Freeborn County on Monday was in the middle of a warning for high fire risk. This on the same day the area was in a morning freeze warning.

As firefighters from the Albert Lea, Albert Lea Township, Alden, Conger, Glenville, Manchester and Clarks Grove departments battled the blaze, and as Albert Lea police officers, Freeborn County sheriff’s deputies and state troopers provided security and other assistance, Griffin and several residents anxiously watched the fire. Some even hosed down their backyard lawns as a precaution in case the fire spread.

The fire ventured as close as 100 feet from at least one home.

“It came so quick and it was such bad smoke,” said Audree Wagner of 415 Oregon St. “It was so high. It was as high as our family room.”

Wagner said she had just arrived back at her home when she received a phone call from her next-door neighbor Karen Arett about the blaze.

Wagner in turn called her husband, John, who was out fishing, to tell him to come home quickly.

“She said our house might be on fire,” John Wagner said.

Arett, who was one of at least two people to report the fire to authorities, estimated the flames to be over 6 feet tall when the wind gusted.

“Every time the wind gusted, the flames would shoot up,” she said. “I started getting very scared.”

She grabbed the heirloom hand-carved ship made by her grandfather and took it out of the house. She also moved her grill and propane tanks away from the house.

Arett, who has lived in the neighborhood for more than 60 years, said she has never seen the field burn.

Zwick, who has lived in the neighborhood for 37 years, said she thinks the fire could have been avoided if there had been a controlled burn in the field and nearby orchards. Over the years the field has always been dry.

Meanwhile, across the field at 1406 S. Broadway Ave., Ken Delano was taking his dog outside when he saw what he at first thought was a cloud. As he went behind his house, he saw what he described as a “massive plume of smoke coming up from the west.”

He noted that at one point the smoke was thick and heavy enough to block out the sun for several minutes.

He climbed the hill behind his house and could see flames near Lincoln Avenue. He did not see any firefighters or police, so he called authorities. About five minutes later they arrived, he estimated.

After that, he said two officers ran down his street banging on doors and alerting him and his neighbors to the blaze.

He noted he was not as worried about himself and his home as he was about his neighbors to the northwest.

“I have a good buffer,” Delano said.

The blaze was mostly contained by 11:30 a.m., but firefighters remained on the scene hours later watching for hot spots.

Delano said he was glad to see Monday afternoon that the fire was extinguished without reaching any homes.

Albert Lea fire officials said Monday evening the fire was still under investigation. They would not comment on whether the blaze was intentionally set.

Freeborn County over the weekend suspended all burn permits. A freeze warning was in effect again this morning and for Wednesday morning, but the National Weather Service had not issued a fire-risk warning for today or Wednesday.

Firefighters in the Stewartville area on Monday battled a wildfire in High Forest Township in Olmsted County. Homes were evacuated as firefighters from Stewartville, Grand Meadow and Hayfield fought it. No homes were damaged. The cause was suspected to be ashes left from a campfire.

Up north near Nimrod in Wadena County, the Minnesota National Guard joined the fight Monday against a wildfire that has burned more than 1,400 acres of woods and brush.

Commanders said the wildfire was 80 percent contained Monday. Property losses have been limited to an attached garage on a residence, and one mobile home used as a hunting shack that was destroyed. No injuries were reported. The cause of the blaze remained under investigation.

Click here to see a gallery of photos from the grass fire.