Funeral services for Ordell O. Underland of Hayward will be held at 10:30 a.m. Friday at First Lutheran Church, Albert Lea. The Rev. Allan Sola will officiate. Visitation will be from 4 to 7 p.m. today at Bonnerup Funeral Service and one hour before service at the church. Interment will be in Hillcrest Cemetery. 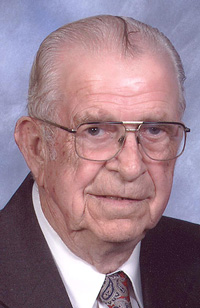 Ordell was born in Elkton, S.D., on Feb. 15, 1926, the son of Cornelius and Martha Underland. He lived in Elkton, S.D., until moving to Freeborn County in 1929 where he attended country school through eighth grade.

Ordell was married to Ethel Tufte on Oct. 7, 1950. He was a member of First Lutheran Church where he also served as an usher. He was a truck driver for Consolidated Foods and later became foreman of the warehouse until retirement in 1983. He also was a hog farmer and raised corn and beans. In 1967 he helped build his home near Hayward. He was a member of the Eagles, Elks and Moose Clubs.

Ordell enjoyed his farm life and enjoyed gardening and sharing his produce with everyone. He also enjoyed playing cards and was an avid bowler in his younger years. Spending time with the grandchildren and great grandchildren was his pride and joy.