Funeral services for Paul L. Hagen, 80, of Albert Lea, will be held at 10:30 a.m. Tuesday at First Lutheran Church, Albert Lea. The Rev. John Holt will officiate. Burial will be at Graceland Cemetery with military honors accorded by the Freeborn County Servicemen’s Organization. Visitation will be from 4 to 7 p.m. today at Bayview/Freeborn Funeral Home and one hour prior to the services at the church. To sign the guestbook go to www.bayviewfuneral .com. 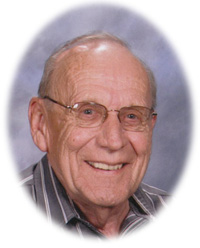 Paul died Saturday morning at the Good Samaritan Center with his family at his side.

Paul L. Hagen was born on May 25, 1931, in Albert Lea, the son of Lawrence and Helen (Haraldson) Hagen. He was baptized, confirmed and married at First Lutheran Church. Paul attended and graduated from Albert Lea High School in 1950 and then served his country in the United States Army. After his discharge Paul returned to Albert Lea where he was united in marriage to Margaret L. Schroeder on June 14, 1958. Paul was a proud member of the Albert Lea Fire Department serving as a firefighter and fire inspector. He received recognition from the City of Albert Lea and from the American Legion for rescuing Margaret Nesje from the Boyd & Jack’s grocery store fire in 1964. Until her death, she never forgot him by coming to his home every Christmas Eve with a remembrance. He also worked with the Freeborn County Sheriff’s Department transporting prisoners and as a technician for the Freeborn County Soil and Water Conservation District. Paul was a member of the American Legion Post 56, former member of the Elks Club and the Sons of Norway. He volunteered as a greeter at First Lutheran Church until health problems prevented his participation. He was very proud that he had donated over 100 pints of blood to the Red Cross. Paul was a very accomplished wood carver and each of his children and grandchildren were blessed with his Christmas ornament carvings. His favorite pastime was spending time with his children and grandchildren especially having lots of family time at his son and daughter-in-laws cabin on St. Olaf Lake in the summer time and special trips to Wisconsin to visit his daughter and her family. The couple spent the last 22 years wintering in Mission, Texas, enjoying activities and other special friends in Mission Garden Resort.

Paul was preceded in death by his parents; in-laws: Elmer and Lois Schroeder; and brother-in-law, Charles Schroeder.