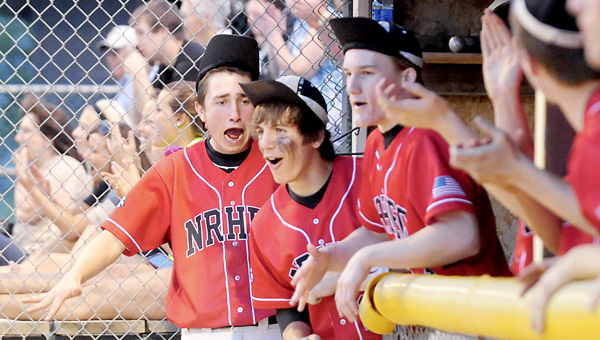 The New Richland-Hartland-Ellendale-Geneva baseball team celebrates as they scored runs in the bottom of the seventh inning to tie Albert Lea 3-3 on Friday. The game went into three extra innings before the Tigers won 4-3.

The win wasn’t until after Dylan See-Rockers fractured his upper leg in the top of the fifth on his way to first base.

“That was a big blow to our club,” Tigers coach Joe Sczublewski said. “Dylan’s been our most protective pitcher all season long.”

Following See-Rockers’ injury, Ethan Abben made a diving catch for the Panthers first out in the bottom of the fifth and smashed face-first into the left field fence.

“He was thrilled,” Sczublewski said. “That was one of the best catches I’ve ever seen in high school baseball. He just went full bore into that thing.”

The Tigers made it to the seventh inning leading 3-0, when the Panthers rallied to tie the game.

“I thought we had terrific opportunity in the seventh,” Panthers assistant coach Al Shultz said.

The inning came down to a squeeze play, but instead of a bunt, the ball was popped to the Tigers pitcher and the NRHEG hitter was thrown out at first.

“They put together a nice rally,” Sczublewski said. “They had some key hits in that inning. That’s why they’re Gopher Conference champions. We were very fortunate to get them out.”

Two more innings passed and the game remained a tie.

In the top of the 10th, Abben scored the winning run for the Tigers.

“We were fortunate to win the game considering we made a few base running errors,” Sczublewski said.

Johnathan Fleek pitched for the first time as a varsity starter for the Tigers.

“Albert Lea pitched well,” Shultz said. “And we hit it, but we hit it right at them all the time.”

Junior Nic Mangskau pitched 5 1/3 innings for the Panthers and took the loss.

“He pitched well. He mixed up his pitches and kept the Albert Lea batters off stride,” Shultz said. “He just ran out of gas in the eighth inning.

Shultz said with only three hits in 10 innings the Panthers didn’t really turn on their game until the seventh.

“After that they picked up the pace and played better,” Shultz said. “If

Shultz said the game against the Tigers set the

tone for the Panthers in their upcoming tournament.

“That was a reality check,” Shultz said.

The Tigers also got a reality check from the game.

They will be without See-Rockers for sections and Sczublewski said everybody else will have to start picking up their slack.